What a beautiful morning! Great day for an adventure don’t you think Nilla?

“How convenient – the bus stops just outside Las Dunas gate, and we’re off – the conductor assists the chofer collecting fares as we go – $0.50 per person with senior discount, of course we get to ride for free Nilla.”

The bus is air conditioned and comfy.  The bus, at our request, drops us off at the rotary where the road branches off – we switch buses to head into Manta.  The wait can be up to 30 minutes, the bus arrives after about 15 minutes..

“Sure is warm out here in the sun.”

“Could get some watermelon Jackson.”

The fare this time is $1.25 per person senior discount.

“The conductor likes us I think Nilla.”

“Jackson, did you see that big fish sculpture?  I think we’re in Manta, the tuna fish capitol.”

“I did.  And did you see the sign that says ‘Our Children Don’t Work’?”

“Unlike rural areas where children work in a small store front or in the fields, Manta boasts that they do not allow their children to work and require them to go to school.”

“So rural children, born into poverty are likely to have less opportunities than those in the urban areas.”

“Yes, and likewise are more likely to have health issues too.”

“Jackson, perhaps we should blog about health care in Ecuador tomorrow.”

Into the very modern terminal, regional buses from various bus lines sell tickets to other major destinations throughout Ecuador. 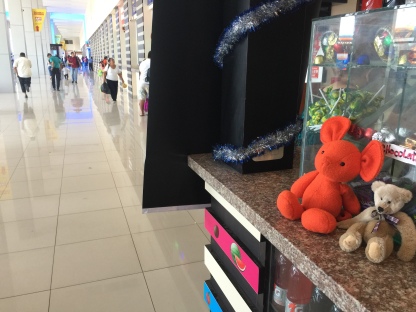 Local buses clearly marked are located on the opposite side of the terminal.  Unlike the regional buses, passenger pay the fare when they get on.

The local bus fare is $0.30 and drops us off right in front of the mall.

“Hey, isn’t that the Hotel Balandro where we were supposed to stay the night, that was until Avianca delayed the flight and we stayed in Quito instead?”

“This mall seems to have almost everything.”

“The MegaMaxi supermarket is too large.”

“Good thing we’re sealed up tight so we can’t get lost!”

“At least we’re in a clear plastic bag and can see what’s going on.”

Almost everything on the list is checked off.  No water shoes, inexpensive watch, tiny flash light, papaya juice or Miracle Whip

Now for a taxi ride back to Crucita.  The cabby initally asked for $25.00 and after a brief discussion was reduced to $20.00 which isn’t a bad price but, we have to stop and get copies of the property keys.

“Our taxi driver is very nice, Jackson.  He had to take a six month course and then pay $1,200 for his professional license.”

“Do taxi drivers have to do that in the United States?”

“I don’t think so, but they do pay for the medallion though.  Uber drivers don’t have that training or expense.”

Back at Las Dunas and the keys work – that’s good – going back to Manta to have them re-cut would be just a little inconvenient.

“I think we had enough adventure for today.  We don’t need to go to La Tierra this evening with the Ts, I’d rather stay home Jackson.”

“If tomorrow is as nice as it was today maybe we can go to the beach.”