“Oh, it’s so cloudy and looks a lot like rain – NOT a beach day or open market for us Jackson!”

“We need to get out and walk none the less Nilla.”

“I know.  Weren’t we going to blog about the health care system in Ecuador?”

“Yes, we are.  As you know, since 1967, the office of the Minister of Public Health, oversees health regulations and policies.  The Minister is appointed by the president.”

“Those regulations and policies are consistent with the public health philosophy which is dedicated to the social support and services to the most vulnerable, under-served populations and focuses on community health and preventive medicine.”

“They even have teams of nurses going door to door to administer influenza vaccinations Nilla.  It is an Ecuadorian constitutional mandate that no one will be refused health care.”

“The comprehensive health care system provides free medical care to all residents regardless of income and without the need to purchase health insurance.  It is a two level system with the IESS, or social security plan option and the second, the public health care plan.  The social security plan members make employee payroll deductions while ‘volunteer’ members, such as expatriots pay a nominal monthly fee of about $70.00, and about $13.00 for each child or spouse.  The social security option became available to ex pats in 2014.”

“And there are no deductibles or co-pays!”

“However since it is government run, there is the bureaucratic red tape and those non-Ecuadorians as well as those who don’t speak Spanish, may find it difficult to navigate.”

“And too, there may be long waits for specialty care.”

“In cases of emergencies, one can receive care at any hospital or emergency room, even the private one for free, regardless of IESS or public health coverage.”

“There were significant improvements in 2007 under the leadership of the then president Correa.  The Bloomberg Survey ranked Ecuador’s health care efficiency (considering both cost and quality) at number twenty world wide while the United States ranked 46th!”

“All physicians and nurses must complete the obligatory one year service to an under-served community.  This mandatory service is a requirement for licensure.”

“More than one hundred students are sent annually to medical school in Cuba, La Escuela de Medicina Latinoamericana, at not cost to the Ecuador government.  Of those students at least fifty percent must be women.”

“They usually go to Chile or Argentina to satisfy the additional training Jackson.”

“Overall life expectancy is 78 years.  There is a high correlation between wealth and health.”

“So once again, similar to education, health and opportunity are related to accessibility and availability.  Poverty is not just measured in income Jackson.”

“Don’t you think it’s time for a walk – it’s not raining, we didn’t go to the beach or the open air market because we thought it would.”

“Yes, time for a walk and go back to that fabulous bakery on the corner of ‘veinticinco’ and malecon.”

A chance encounter with the Ts friend who is relaxing and enjoying refreshment at one of the many beach front restaurants, Arena Restaurante – a great place to people watch and enjoy the Pacific.

“He should come with us Jackson.  If the bakery is open, he’s in for a treat.”

“Absolutely.  We’ll take him by the gym too, the equipment is old but still functional, good for upper body strength training.  You could use some of that.”

“You did refer to me as floppy, but I’m thinking working out at a gym is not going to be much help.”

“He’s coming with us Jackson.”

“Well after all we did have fun on the bus yesterday.”

Past the fishing boats and today’s catch.  Past the gym which will be open on Monday January 7th.  Past the meat store and up to Crucita’s only traffic light.

“The bakery is open Nilla.  Smell that bread coming out of the oven?” 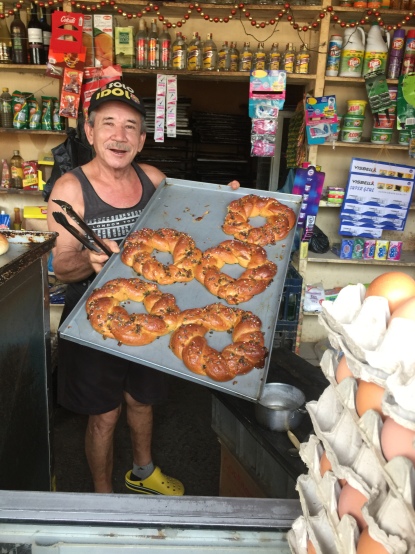 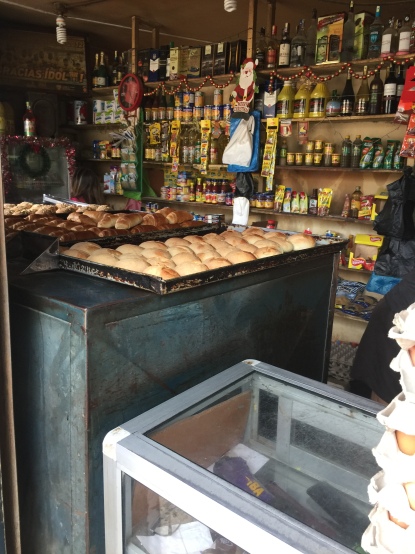 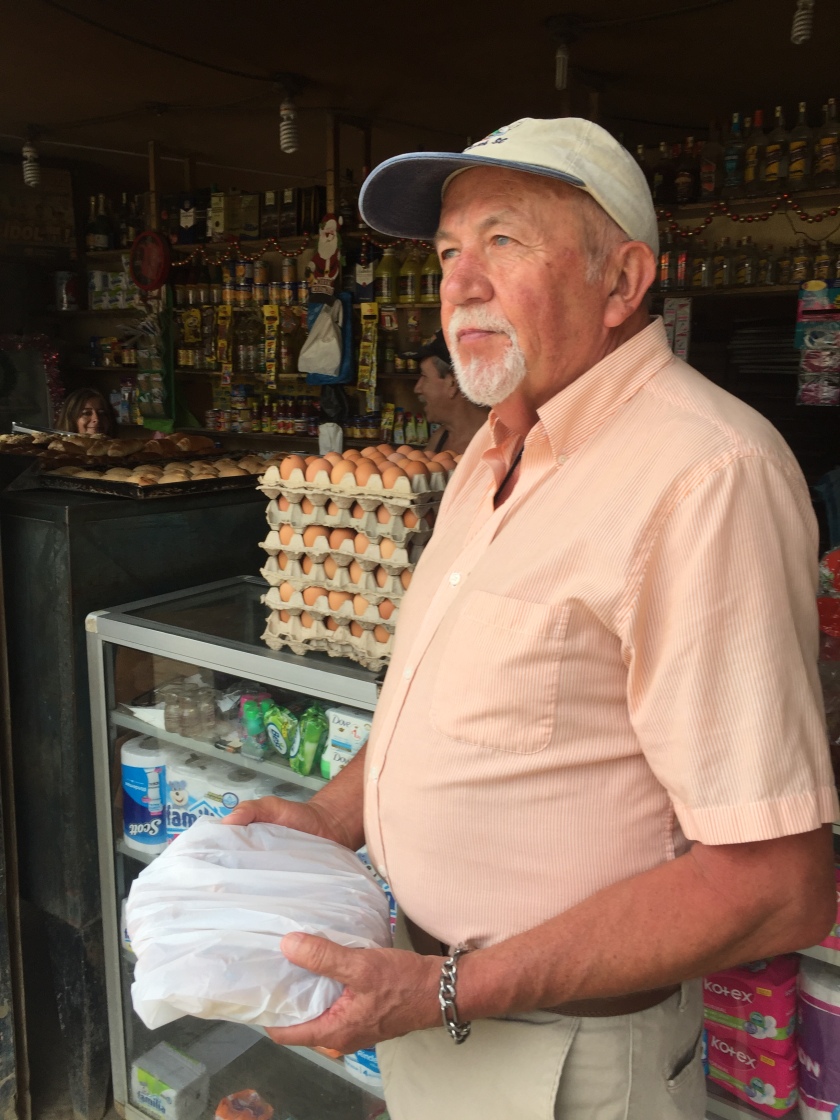 “The baker enjoys and is proud of his work.  In the morning he prepares the bread, sets the dough in trays to rise and then bakes in the afternoon to have his goods ready for sale about 4:30 or so.”

“People buy in the afternoon to have the following day.”

The trio nibbles on a croissant as they head down the ‘veinticinco’ to Julio’s place to stop and chat with folks there before going the loooong way to the Chinese restaurant.

“Nilla, what do you suppose we should call the three of them?”