“What’s new?  What are you so excited about?”

“It’s a new day Jackson!  The trimotos are already buzzing along the Malecon, it’s not raining and who knows what will happen today!  Glory be!  Everything is new today!”

“It’s just the start of another day Nilla.”

“We might be going to buy some fish or shrimp or something, and LEARN Jackson!”

“Speaking of learning, weren’t we going to blog about Ecuador’s education system?”

“Suppose so.  What have we learned about the education in the country?”

“First of all it’s compulsory, a constitutional requirement, at least for the first nine years, beginning at age six.”

“But pre-primary or kindergarden as they call it in the United States is not mandatory.”

“The secondary level, from age twelve to eighteen is divided into three year cycles and there is an opportunity for post-secondary – a two year program called tecnica superior.”

“But you have to pay for anything beyond the mandatory education requirement, right Nilla.”

“Yes.  And if you enroll in a private school, of course then students, or their parents, must pay tuition.  Another issue is the limited funds for public education. It is not uncommon for families to pay a nominal fee for supplies, school security and upkeep.  Some even have ‘clean-up days’ and if a family doesn’t participate, they could be required to pay a fee.  The primary school enrollment rate is about 95%, but there is a 25% drop out rate at the fifth grade level despite the constitutional mandate.”

“Jackson, not necessarily.  I’ve heard that some private schools take the tuition money and pass the child along from grade to grade just to keep the parents happy and  the money flowing, but that’s not usual.”

“Have you noticed the uniforms?’

“The parents do.  Some are very costly, especially the ones for the private schools.”

“What about the rural communities?  Spanish in some of those communities is not the primary language.”

“The goal of education in Ecuador is universal literacy – in Spanish.  In the 1980s  recognizing low literacy levels brought reforms and even now, there is a movement to provide a culturally sensitive curriculum, and not necessarily entirely in Spanish. The day begins at 7:15 with mid-day dismissal around 1:00 PM and classes resume later in the afternoon.  If a holiday is on a school day, some schools require the time to be made up the following Saturday. The schools in Crucita start vacation the end of January and are off for two months.”

“What about the higher education system Jackson?”

“It’s structured much like it is in the United States.  There are several good universities in major cities like Quito and Guayquil.  There is a polytechnical institute in Quito as well.  Some exchange students come to Ecuador to study history, language and geology, specific to the country.”

“Jackson, what was that noise and the smell!!”

“Looks like the microwave just went caput!  You were talking about ‘new’ – as in new microwave in the near future?”

“No cafe con leche for the Ts this morning.”

“Not so Nilla, remember there’s one in the apartment next door the Ts can borrow until Russell and Amarita come up with a replacement.”

“The Ts are going off to Fremas to purchase ingredients for dinner tonight but we’re staying here.”

The creche is gone – Christmas season has officially ended.  The mud has nearly dried.  Forecast officially rain today.  Seas are calm, and boats are poised for high tide, except one – repairs in progress.

“No fish Nilla, not a bit, much less the sought after camarones or langostinos for dinner tonight.”

“Maybe they all enjoyed the weekend and didn’t go out.”

“That means tomorrow up early to check out the catch for sure.”

The bakery is open, but to close soon.  Apparently open at 6:00 AM, closed from 1:00 to 4:00 and fresh out of the oven goodies around 5:00 PM – except Sundays.  Racks in the back are ready to be baked, lots of sweet breads, the Aventurero’s favorite.

“We’ll head back to Las Dunas with the rolls and make alternative plans for dinner.”

“Do you want to go out if it’s raining?”

“Afraid to get your ears wet?”

“Of course not, I was just thinking about you!”

“If we go to the bakery, maybe by then there’ll be fish for tomorrow.”

The ‘Trio’ heads out to the bakery first in hopes for fresh hot rolls and sweet breads. 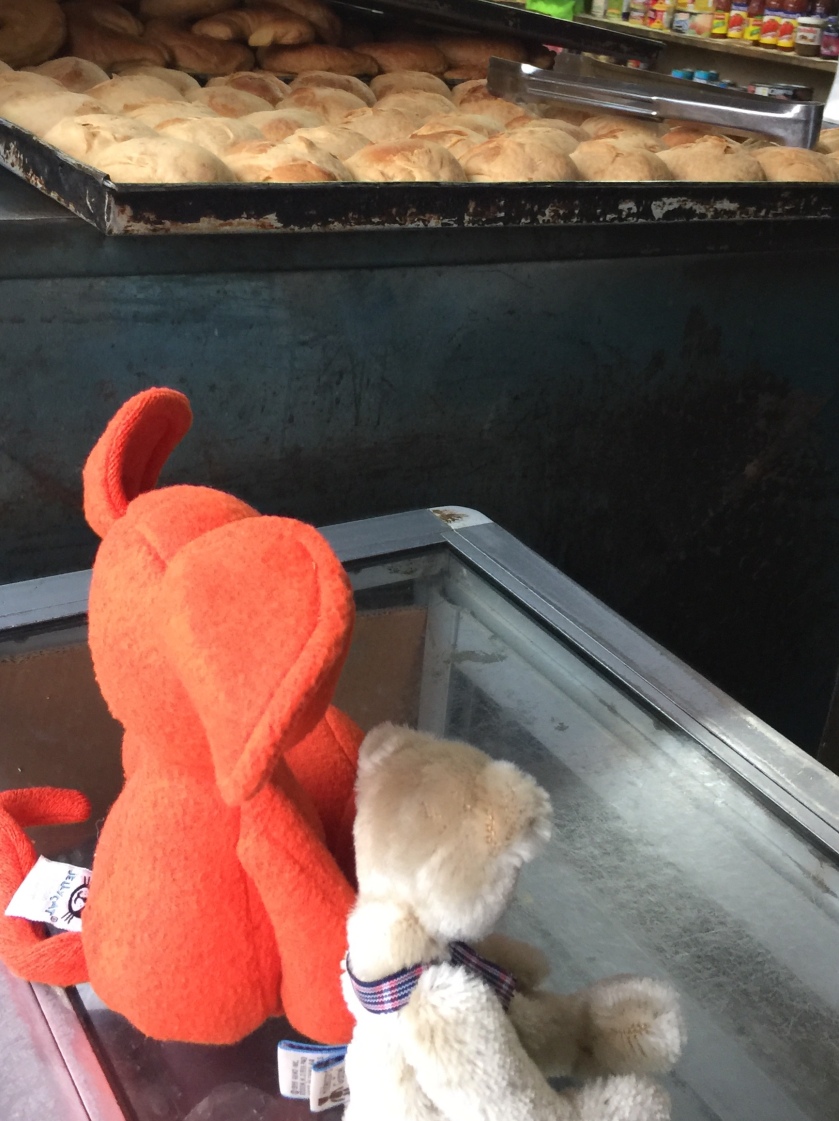 “It’s open – smell the bread, we’ll have to wait a couple of minutes for the rolls.”

“It’s worth the wait.  I’m thinking that in the future by 5:30 PM el pan should be coming out of the oven.”

“We’ll take a tricimoto to Rimini, Aventurero says our friends are already there.”

Joining friends in a corner table under the protection of the thatched roof at Rimini. Dorado, espada and one other fish are the available choices of the evening – no langostinos.  The Ts enjoy espada and shrimp while the Aventurero has a combo platter of fish and shrimp.

“Looks very tasty to me Jackson.” 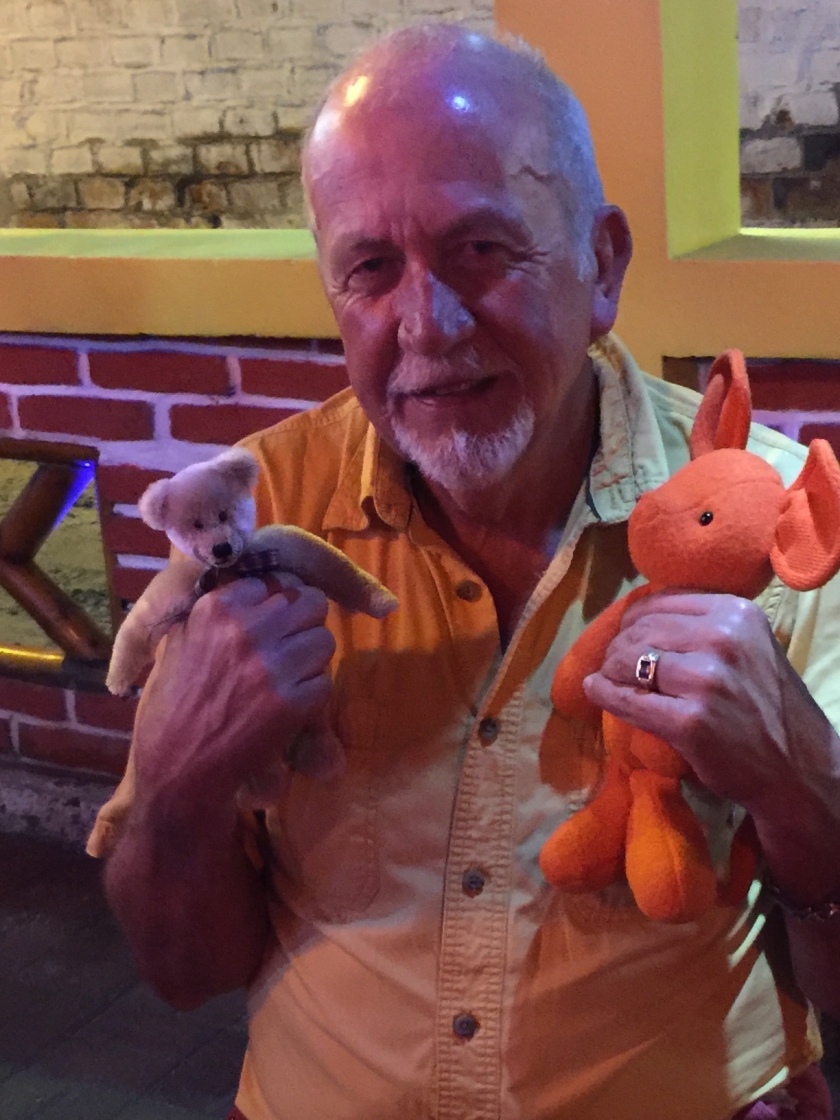 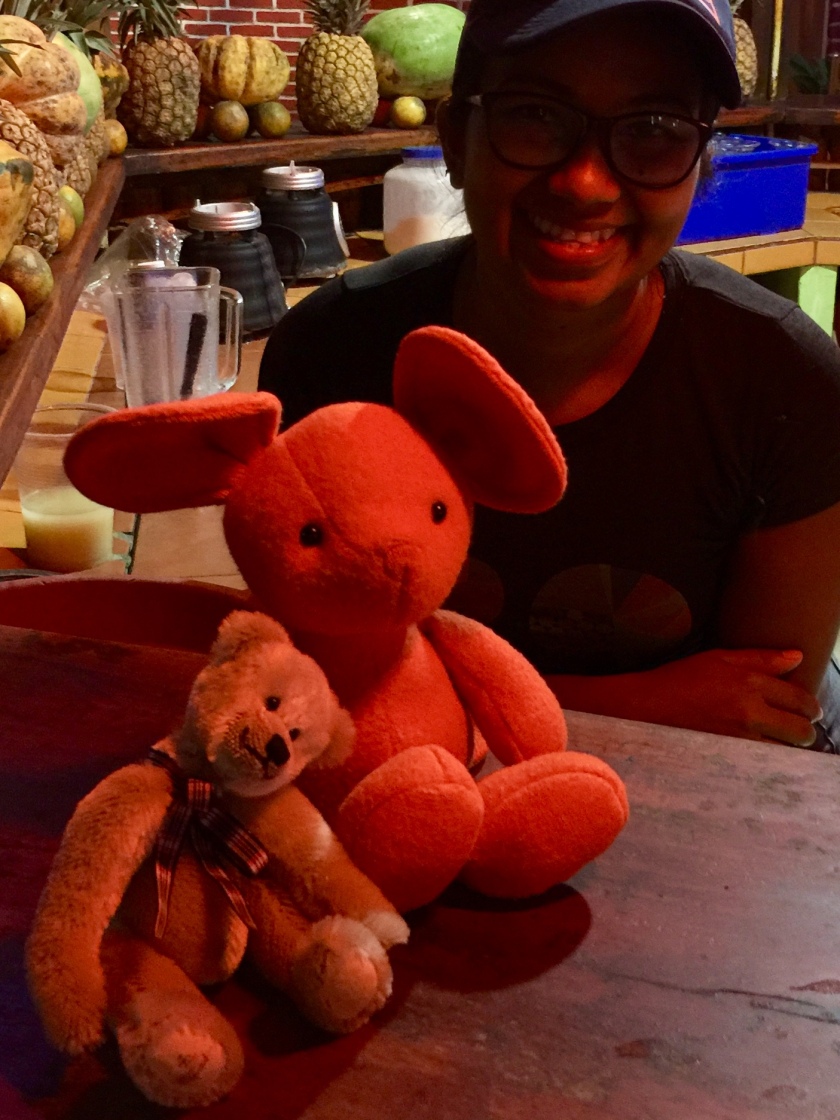 It’s still raining – a lift up the hill and then back down to the malecon in our friend’s car.

“Of course it was – and tomorrow too!  Good night Jackson.”