“No rain either.  Off toward the pier to find some langostinos or shrimp.”

“Yick, the roads are still muddy – would have thought they’d have dried by now.”

“The boats are waiting for high tide to go out again.”

“There’s lots of dorado – look at that, they’re a big fish, but no shrimp.”

“Guess we’ll just have to keep checking later on in the week.”

“Or, we could head up towards the ATM – there are fish ‘stores’ there and see what they might have.”

“Jackson did you see that?  That dog just chased that truck and almost got run over – oh look out!  The dog is charging the Ts.”

“Unusual, remember our blog earlier about the dogs, wonder what’s up with this one.  Good thing the owner is around.”

“Maybe the truck just set him off, maybe scared.”

Up further on the malecon and onto a side street is the fish vendor.

“Me neither, only frozen.  No langostinos, just shrimp – but pretty good size.  She’s not going to budge on the price.”

“The Ts are going to buy them anyway, and you’re going to be busy in the kitchen. She says they’re from the ‘piscina’.”

“A little marinade from freshly squeezed limes, orange juice, achote paste, garlic, onions, then sauteed in olive oil, served with a light tomato sauce with angel hair pasta.  Heat up some fresh rolls in the oven for dipping…”

“It’s a good thing there is a speed bump on the main road near the ATM.  Cars, buses, tricimotos just go zooming around. We might get run over!”

“Is that a speed bump or a speed hump?”

“Jackson, are you getting technical?”

“Speed bumps are one way of ‘taming’ the traffic with a vertical deflection to slow traffic. And in Crucita we’ve seen several varieties.  Speed humps across the road, usually made of pavement, are parabolic or circular 12 – 14 feet transversely (across) and span the entire width of the road.  The ones by the ATM are speed humps, the sign even indicates that they are humps and not bumps.  Further more, the humps are often found in a series to prevent motorists from speeding just after a single hump. They’re typically located in low speed areas, 25 mph or 40 kph.”

“That doesn’t seem to work around here Jackson.  So, what’s a speed bump?”

“Bumps in the road, we’ve seen a variety of them, ropes, pavement and so forth, especially along the malecon.” 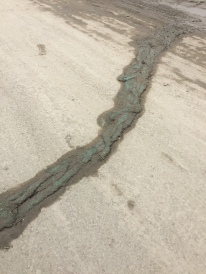 “Is it a bump or a hump just outside our house in Las Dunas?”

“Well, it doesn’t really fit the description for hump or a bump.  It’s not in a series, it is parabolic, but it certainly is not twelve to fourteen feet transversely.”

“So are we going to get into a discussion about camels now?”

“Just thought I’d ask.  Don’t you think there’d be a better way to slow down traffic, cars scrape on the one in front of the house all the time and I’m afraid that one of the tricimotos will tip over even when they do slow down.  And on the malecon, people have placed their own home made bumps without any warning signs.”

“Nilla, the speed bumps have been controversial since their inception – people argue both the pros and cons.  Arthur Holly Compton was the one who developed the idea when he was concerned about the speed of cars passing in front of Brookings Hall at Washington University in St. Louis Missouri where he was chancellor.  The first place to actually put his ‘bumps’ into practice was Chatham, New Jersey in 1953.”

“In New England they use pot holes instead.”

“The Aventurero is coming to dinner too.”

“Jackson, you get to wash the dishes.”

“Dinner dishes all clean, you get to put them away.”

“Do you think they’ll take us with them?”

“They have to, we’ve come all this way.”