“Marine layer clouds, the tide is in – good time to go to Portoviejo.”

“I think we should stay here and look on the computer and perhaps read a bit more about the Galapagos.”

“Okay, when the Ts get back we can go up the Malecon and see if there are any shrimp Jackson, this time I’d like to try baking them with a little garlic.  I’ll make sure the Ts pick up some horseradish for a dipping sauce.” 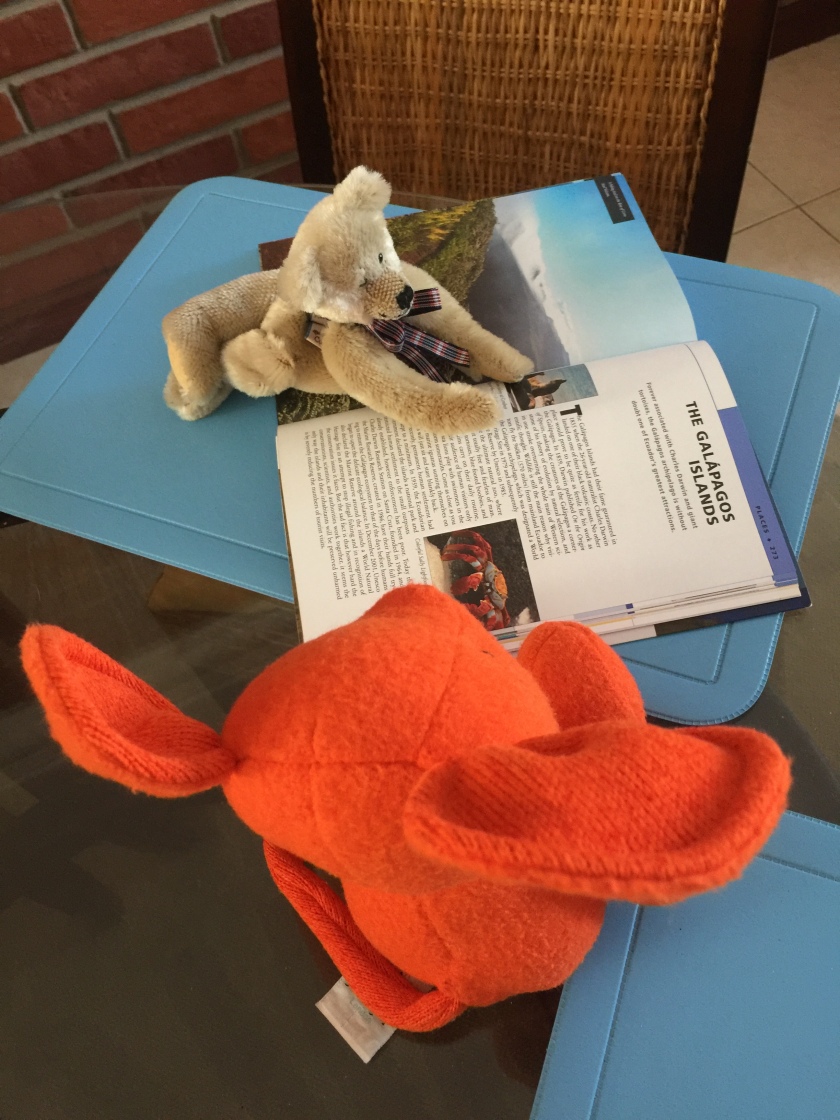 “The Aventurero is coming along with the Ts.  And this morning’s test with the walkie-talkie is a success Nilla – he can communicate with us from the observation point up on the hill!”

“That’s much better than relying on WiFi, the problem is they have to have both units turned on.”

“Yes, but if they’re planning to meet some place, and the restaurant is closed, like it was the other night, at least there is some way to communicate.”

“Carrying it around too?”

“Don’t worry about it Nilla.”

“Anyway, remember the shrimp we bought that was frozen?”

“Well, she claimed it was from the piscina – farmed shrimp.”

“Yes Jackson.  The first shrimp farms were established in 1969 in the Guayaquil Gulf and has expended from that point, in fact, Ecuador’s shrimp farmers plan to grow shrimp production by 10% in 2019.”

“That’s great news for the Aventurero, he seems to love shrimp and prawns”

“You noticed that too.  But there are challenges too for  shrimp farmers including diseases that can impact yield – bacteria and viruses and not many experts in Ecuador to treat them.”

“I wonder if anyone specializes in shrimp diseases at Bigelow Science back in Boothbay?”

“Anyway, Ecuador has the third largest harvest of Whiteleg shrimp in South America.  It is Ecuador’s second largest non-petroleum export product, the first being bananas.  China imports about half of the product, they have lower labor costs while Ecuador has relatively lower farm production costs, so often the shrimp is exported HOSO – heads on shells on – they’re removed before sold to China’s restaurant sector, where they are considered a premium product – firmness, color and taste.”

“Wait a second Nilla.  HOSO could also mean – heads off shells off.”

“Well, think about it Nilla.”

“HOSO is industry talk and no one would be confused as to what it means!”

Back late from Portoviejo – or later than expected.  No horseradish and no cocktail sauce either – some celery.  A pound of frozen shrimp, no shell, and de-veined with garlic and other spices ready for the oven or grill for $6.75.  Groceries put away, time for left-over lunch.

“Looks like we didn’t do too bad price-wise with the frozen shrimp after all Nilla.”

“Guess not.  Looks like Aventurero has water shoes now, good thing, in time for the Galapagos visit planned for later this month.”

“It’s too late to take a walk to the fish vendors, that will have to wait until tomorrow.

“Let’s head over to Julio’s, we’ll meet the Aventurero there and then go to Crucita Village for dinner.”

“No word at Julio’s as to what happened with the power last night.”

“What does that mean Jackson?”

“‘Welcome to Ecuador’, an expression used to explain the otherwise non-explainable.”

Crucita Village is quiet, until we get there – beginning the migratory trend from Mi Tierra to the hamburger and nacho haven.

Another late night back to Las Dunas.

“Music Nilla, blasting from a car out on the Malecon.”

“Seems that on the weekends everyone’s vehicle becomes a traveling tune box on four wheels.”

“Sure does, and it seems as though it is a contest to see who’s is the loudest.”

“So much for sleep.”