“I can hardly wait.”

“They haven’t arranged any tours yet – waiting to see what’s available and deciding on what to see and do once they get there.”

“It may be less expensive that way too.”

“It’s looking like rain, not sure we’re going up the hill.”

“That will be disappointing if we don’t, I want to check out the parapentes.”

“You know what is interesting Nilla – remember that restaurant Ala Delta? We weren’t sure where that name came from and I just figured it out.”

“It actually is Spanish for hang gliding.”

“So what’s the difference between hang gliding and para-gliding?”

“For one thing the glider shape – Hang-gliders are rigid with the sail cloth stretched over a metal frame while the para-glider is a harness that is suspended underneath a fabric wing.  The para-glider controls direction by pulling on cords and the hang-glider by shifting the body.”

“Does one go faster than the other?”

“Do you think that the restaurant owner confused the two?”

“Don’t know – could be that up on the hill they do both, but we’ve only seen para-gliders.”

“We’ll just have to ask then. But don’t forget we’ve seen parasailing too.  That’s entirely different – parasailing is purely recreational with the sail typically attached and towed  by a boat, while paragliding is professional and recreational.”

“But time for football now. I don’t think the Patriots will win.”

“Jackson, have some confidence in our team!  Did you see that touchdown?  Wide open – number 13 on the 13th – Dorsett!

“Look at that, Sarah Thomas, first women referee in a NFL post-season game, it’s about time!  By the way, will we be back from the Galapagos for the Super Bowl?”

“That’s good – especially if the Patriots are in it.  Do you think Gronk and Brady will play another season?”

“How does that song go Jackson?  Going to Kansas City, Kansas City here we come!”

“No singing yet Nilla, the game is not over – it’s just half time.”

“What do you think now Jackson, we won, you can join me in a duet.”

“Time to climb up the hill and catch up with Aventurero, there’s a cool breeze.”

“The clouds help too.  Have you noticed all the moth wings on the ground, and look some are resting on this tree.  What are they?’ 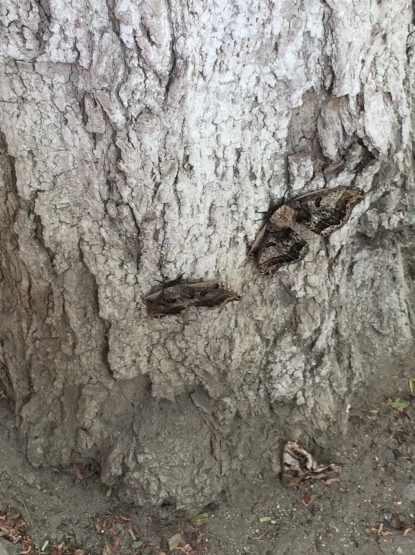 “I’m not sure but undoubtedly you’ll be doing some research soon.  This walk isn’t so bad, the last time we were up here it seemed a lot more difficult.”

“Aventurero’s house, the Pyramid House, is very nice but dangerous Nilla, you can easily step of the side of a staircase and be gone.”

“Gone with the breeze.”

“There’s quite a few people up at both the refreshment stand and the restaurant below.  Time to find out about hang-gliding and para-gliding, the sign says both but is that accurate?” 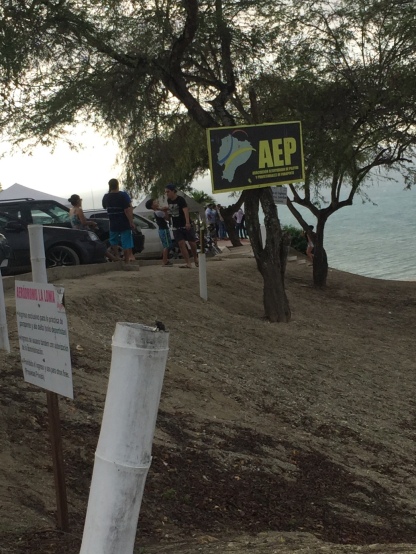 “Sure is breezy up here, lying in the hammock is more like an amusement ride.” 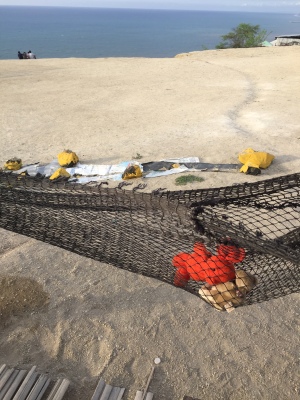 “Have you noticed more moth wings up here too?  Aventurero says he sees lots of them at night in front of the Pyramid House.”

“Well, according to the staff there is both but very little hang-gliding in the recent past.”

“I think it’s time to return to Las Dunas and have some shrimp, the cocktail sauce is very tasty even without horseradish.”

The Trio makes it down off la loma in time to watch the Eagles lose.  Nilla is right about her sauce and the shrimp.  It’s late and Aventurero has to walk up the hill.

“Time to clean up and head to bed.”