“I am Nilla.  But before turning to football, we have an important blog to complete today, a timely blog.”

“What topic Jackson, I have a big day ahead – cooking double baked potatoes and potato skins.”

“The moon, Nilla.  You know that’s in part why the Malecon is flooding.”

“So, we have a full moon every month.  What’s so special to blog about.”

“Nilla, it’s the last blood moon for the next two years.  We’ll be entering a period of time devoid of lunar eclipses.  This full moon is also a super moon, meaning that it is closer to the earth and thus appears bigger and brighter.”

“I remember how wonderful it was to see the total solar eclipse in August 2017, this could be special too.”

“It is special.  The January full moon is called the wolf moon or spirit moon.  The eclipse with make the moon appear reddish, so it is a super wolf blood moon – special, very special.”

“If the weather cooperates we could really have a wonderful view – and Aventurero on his hill top upper deck should have a fantastic view if there are no clouds.”

“When does it start?”

“If there is enough noise on the Malecon you can.”

“But what about the flooding.  High tide is 3:24 this afternoon which may keep things quiet and I just checked the weather – atmospheric pressure will be falling and it is expected to be partly cloudy about the time of the eclipse”

“We still might be able to see some of it.  But now, let’s talk football – futbol americano.”

“The Patriots are playing the Kansas City Chiefs as you know Jackson.  In ‘away’ playoff games the Patriots have not done well, which is a concern, and Los Angeles Chargers were able to score well in the second half against the Patriots in last week’s game, a concern about defense.”

“It’s that winning that makes people to want to have the Patriots to lose.”

“The Pats are favored to win this Nilla. I’m not sure what the point spread is though.”

“Jackson, we’ll be nice and warm watching the here in Crucita but cold at the game. A winter storm covered the Midwest with snow and ice last night. Enough about football for now – I’ve got some meal prep work to do.”

“Maybe we can go and see the progress on the mural we saw yesterday.

“We really should go now if we’re going to go – the ocean will be flowing over the malecon if we wait.” 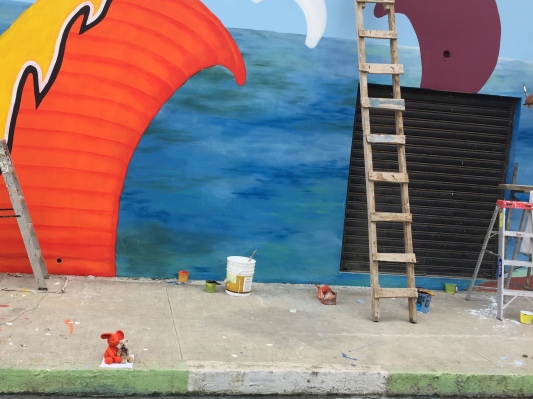 “Look at the turtle, magnificent!”

“I can hardly wait until it’s done.”

“We should head back, I’ve got cooking to do.”

“It’s not looking good for the eclipse for sure – lots of clouds.”

“We can still hope for a peek at least.”

“The Patriots and the Chiefs are up next.  Another nail biter to the very end!”

“Never before in the history of the NFL have both championship games ended in overtime.”

“It’s still cloudy out, no eclipse viewing for us tonight.”

That’s too bad, but at least the Patriots won.”