“The photos – down load and up load – it’s taking too much time Jackson.”

“We’ll start on the laundry while that process is ongoing and just have to wait, no much else we can do.”

“I can’t even access my notes Jackson – this is taking forever.

“Let’s go for a walk.  We can check out the mural that was being painted when we left and stop by the ATM.

“Oh my, another mural, this one along side of Las Vegas Resaturante.” 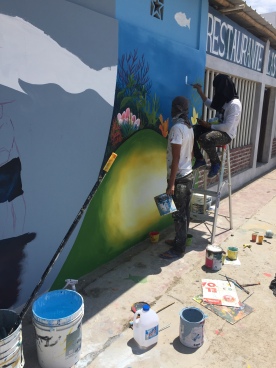 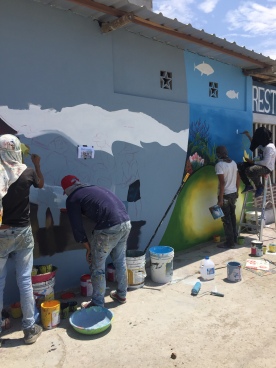 “What’s this Jackson?  Looks like at notice for a tsunami drill tomorrow.”

“What is that like? A simulation – do we need to evacuate too?”

“The mural is finished and is marvelous. 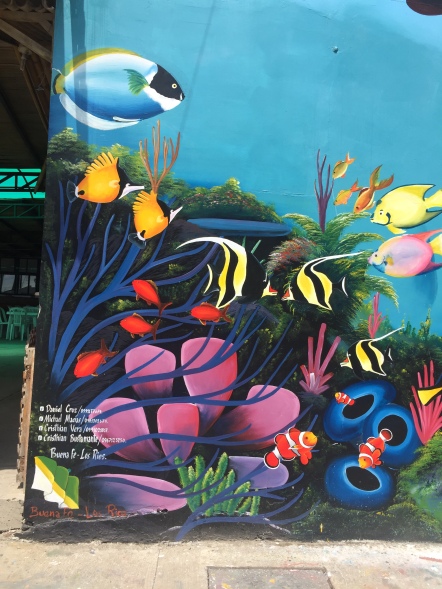 Genoa Pizza is closed.  Getting ready for the move.”

“Doesn’t look as though it will be open in time for February first, but we’ll see.

“The ATM is out of commission for the next hour.”

“Let’s get some lunch then return.”

Rimini’s dorado a la plancha is delicious as always.  Aventurero walks by as the Ts start out towards the ATM.  The three plan to meet later on. No success at the ATM.  Looks like a trip to Portoviejo tomorrow.  Laurdes has sent several texts about properties in San Clemente, one is no longer available for next year.

“Jackson, the pictures still haven’t up loaded, this is frustrating.”

“It’s time to go to the bakery.  Aventurero hasn’t stopped by.  He’s probably with his friends, we’ll go anyway.”

“The rolls are so fresh and smell so good.  Aventurero is at Ramblas.”

“Too tired to go – have to at least post Friday’s blog and then to bed, maybe tomorrow we’ll be able to catch up, at least a little.”