“So, they depend on the cell phone for the time.”

“Yes, but the cell phone is not always in hand and if one is busy and loses track of the time?  You see what I’m getting at?”

“That the watch thing might be part of the problem with having people show up to do the work on the property?”

“Last night Diego said he was going to investigate the identification of picudo and espada.  I think picudo is sailfish and espada is swordfish Nilla.”

“What’s the difference between the two?”

“That’s all very good but, it doesn’t answer the picudo and espada question.  Is marlin part of the issue?  I think it might be part of the confusion.  Marlin is not the same as swordfish but is part of the billfish family and come in blue, black, white and striped.  They are larger than the sailfish.”

“What is the difference in taste?”

“From what I’ve heard and read Nilla, marlin is tougher than swordfish, while the swordfish is meaty and flavorful and usually served as a ‘steak’.  Sailfish on the other hand is firm and meaty but lacks the mild or rich flavor of the swordfish.”

“So, we have three billfish, the swordfish, the marlin and the sailfish – now all we have to do is figure out which is picudo and which is espada.  I suspect that espada is swordfish and picudo could be sailfish or marlin and is just lumped in one name.”

“I hope that Diego can figure this out.  Maybe the Ts will help too, that is if they have time today.”

“We still don’t have a topic today.”

“Maybe we’ll just post pictures of flowers blooming around Crucita.  I know the Ts will bring back photos of the properties they see today for our review.  That maybe enough.”

“We could also blog about San Clemente if the Trio comes back with some opinions about their experiences today.”

“That too, but remember, we have the following day and next, and the next.  While they’re gone we need to be thinking about themes.”

“Nilla, I found it under ‘Order Wholesale Fish From Ecuador’, picudo is marlin!”

“Great, mystery solved! But it looks as though it is also called ‘aguja’.  Just in Ecuador it is called ‘picudo’.  And marlin is tougher, that’s what Diego was saying about his picudo at Rimini.  It all makes sense.”

The Trio is back from San Clemente, where it poured during most of the visit.  Aventurero is up on the loma changing out of soggy, wet clothes.  The Ts, back here in Las Dunas don’t have much to say about the experience, other than they found a fishing boat named ‘Aventurero’, saw several fishermen repairing nets, observed how very muddy Avenida Quito gets when it rains there, and it seems they still have not found the perfect apartment for next year.  No photos of properties for review. 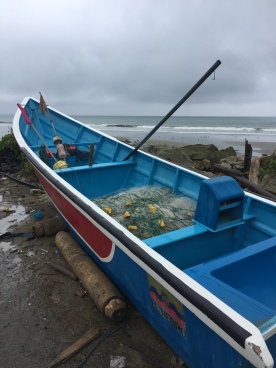 “Nilla, perfect may not exist for the Ts.”

“They had a good lunch though at Restaurante Viviana, across the way from Restaurante Submarino, which is where they ate the last time they were there.”

“Good to know that they won’t starve when they return next year and stay in San Clemente.”

“Friends here will be missed, they’ll have to return periodically to say hello, especially when folks gather at Mi Tierra on Friday evening and by then the ‘short cut’ road between Crucita and San Clemente should be in much better shape.  Maybe a tricimoto would be willing to travel it.”

“Doesn’t look like we have much to post today except to say it rains during the rainy season, not profound but true.”

“But we did solve the picudo mystery didn’t we!?”

“Did you notice the flags on the beach are red again?”

“Because of the storm I suppose.”

“The Ts are going to Ramblas – Aventurero is already there.”

“Wonder what will be the topic of discussion this evening?”

“Could be about most anything, Jackson.”

Ramblas is quiet – the topic of discussion, after Diego and Pelicano finish talking about the roof extension, is immigration.  Everyone has an opinion about tourist visas – and none are attorneys practicing Ecuadorian law.

“From what the Ts said upon their return to Las Dunas, it seems la imigracracion is confusing Nilla.”

“Sure sounds that way – we need to get clarification some how.”

“The Ts will get it straightened out I’m sure.  Time to go to sleep.  Kleber is coming tomorrow to look at the AC downstairs and you have a shrimp dish to prepare.”

“And no shallots or parsley yet.”