“Well, we’ll see who shows up and when today.  Don’t know if Kleber will come and check the on again off again downstairs AC unit.”

“You know Jackson, we had planned a post about the street vendors in Crucita, there are lots of them selling so many different things from food and beverage, to ices and ice cream, trinkets, hats and sunglasses, shoes, fruits and vegetables.  They set up stands, are mobile on foot, bike or truck, sometimes even a motorcycle.”

“I’ve noticed.  The ‘informal sector’ terminology coined by Keith Hart in 1970 in reference to vendors in Ghana is sometimes referred to as the ‘informal economic sector’.  It has been studied, but characterization of this sector remains elusive.”

“In Ecuador, there has been talk about providing government support to these industries individuals and families but there has been a fear that such assistance could result in more urbanization and contribute further to urban squalor as people move from urban areas into the cities in search of more lucrative work.”

“I read that in Quito, several years ago, 6000 street vendors were moved to commercial centers and it appears to have been a successful endeavor.”

“There aren’t any commercial centers here in Crucita Jackson.”

“So that wouldn’t work.” 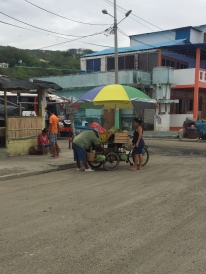 “I’m not such that the ‘informal sector’ is regulated here in Crucita or in other small towns.”

“I think the food vendors at least have to have permits and that there is municipal governance that assures that there is a permit in place and that it is current, especially for those vendors selling prepared food and beverages.”

“But that leaves out the sunglasses and hats, souvenirs, fresh produce, because the produce isn’t ‘prepared’. And what about the fish vendors?  They don’t have the fish on ice!”

“What about the vendors at the toll booths selling water or the ones that climb aboard the buses at terminals offering packaged, cookies, candies and biscuits?”

“Water not only at the toll booths but at intersections, especially ones with traffic lights!  It’s nice to see that there is an effort to keep people hydrated.”

“Anyway the Ts did try some pinchos several weeks ago and they said they were delicious, and thoroughly cooked.” 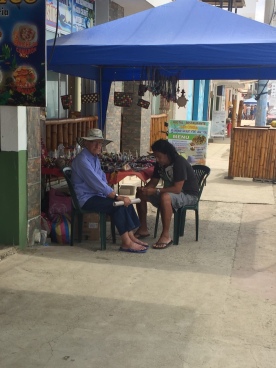 “That’s the problem Jackson.  You have no idea what the preparation kitchen conditions are like, hand washing etc.”

“Nilla, are you jealous that someone else’s cooking was delicious, afraid of the competition?”

“Not at all.  I just want the Ts to stay healthy.”

“Anyway, I’ve also noticed that the vendors that set up sidewalk stands always claim the same space.  It’s their little piece of real estate, a store without having to pay taxes or worry about maintenance.”

“I’ve noticed that as well.  Speaking of competition, I wonder what would happen if some other vendor came along and took a vendor’s usual space.”

“I’m sure I wouldn’t want to be around to see that Nilla!”

“The busiest time is the weekend, especially along the malecon.  I wonder if the vendors are aware of the term ‘informal economic sector’?  I’m sure they perceive themselves in a very different way.”

“When we get out for the walk later today, we’ll see who’s set up ‘their’ spot and see who’s selling along the beach front.  I like the guy with the hand-squeezed, squeaky, honky horn.  I have no idea what he’s selling.  He must put on at least ten to fifteen miles on a weekend day, maybe a little less during the week.  He stops and talks with the Las Dunas guard very once in awhile.”

“It’s after 8:00 AM and people should be arriving to perform the work here.  But ‘manana’ is ‘manana’ you know.”

“Hmmm, 10:30 AM is the ‘new’ 8:00 – 9:00 AM time.  Tito’s here to chop down the other palm tree and clean up the mess off the back deck.  At least it is after breakfast and before lunch.  It could be so beautiful back there, a little garden, some patio chairs, an umbrella, a lattice screen.”

“I agree Jackson.  But we don’t have any way to purchase plants and start a garden and I’m not sure that when we leave anyone will take care of it.”

“Kaboom!  Timber!  Gone!  That was our Christmas tree, remember Nilla?  I wonder if the third one will succumb too.” 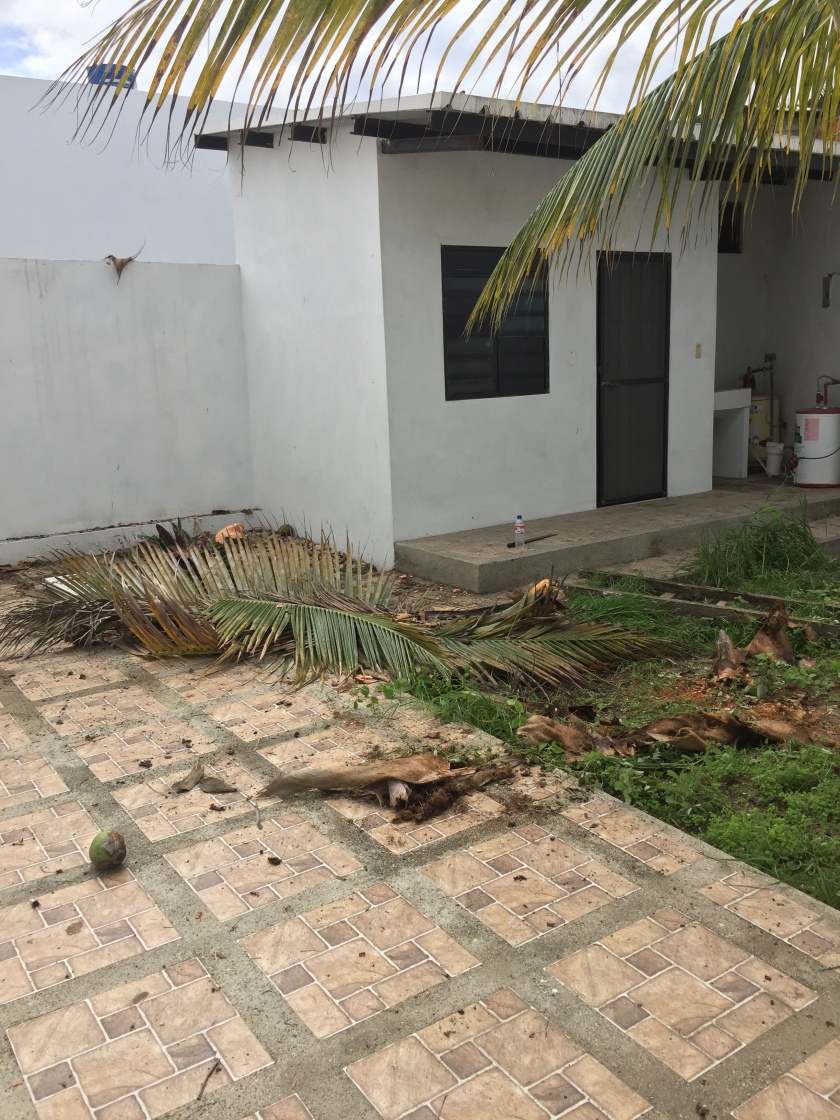 “Oh, no Jackson, the tree hit the patio and broke the corner!  There goes our beautification plan for the back patio space.”

“Take care of one problem and create another.”

“Tito’s assistant has a big black beetle in his hand.  He says that this insect gets into the palm and kills it.”

“Ugggly!  They’re going to burn the debris in the vacant lot next door and cart off the trunks I think.”

“Time for a walk on the beach and lunch afterwards Jackson.”

Lunch and a little afternoon rest.

“Let’s go find the other mural Aventurero says they’re painting on the malecon.  Diego says that the municipality is paying the artists and they can continue to paint as long as they have permission from the property owner.  I wonder how many more they will do?”

“Look, Aventurero is at Ramblas with Guardagatos.  We’ll come back as soon as we check out the mural.”

“The malecon is an obstacle course this afternoon Jackson.  All the vendors are out moving up and down the road.  The stands are set up and tables in the middle of the sidewalk.  No place for the pedestrian, again.”

“There’s the mural, looks great, not my favorite though.”

Friends from Mi Tierra join us later, on their way to entertain anyone up at Julio’s.  Still others arrive and a discussion about game night ensues.  It would be fun if we could get a group playing cards, cribbage, Boggle, What The Fish, and more.  To be explored at a later time.

“I don’t know how to play What The Fish, do you Jackson?”

“No idea but we can learn.”