“It poured last night Nilla.  The Ts were up and mopping.  One of the other bedroom windows leaked, the window in the second bathroom doesn’t close all the way, so of course there was water there too and the skylight leaks down the stairs.” 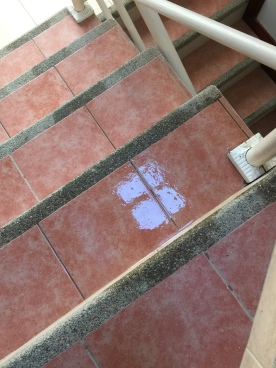 “The stain on the ceiling in the bedroom, the one the twin beds is getting bigger.  Where in Manuco?  Russell, our absentee landlord, asked the Ts about him the other day.”

“Don’t know.  Last night Aventurero and the Ts were talking about going to Montecristi this coming week and they want to return to San Clemente.  They’re not going to wait around anymore.”

“What about that black ‘bug’ in the palm trees Jackson?  Do you think there are more around?”

“Nilla, they are known as the South American Palm weevil and they can really do damage to many types of palm trees, making it a nightmare for the gardener who is fond of the palms growing on the property.”

“So what we thought was a slug was the larvae?”

“Yes.  The official name of this beetle is Rhynchophorus palmarum.  The adult can be as large as one and a half inches in length, is black and attacks stressed palms, attracted by a compound released by the injured palm.”

“I think I saw a dead one on the patio last week, Jackson.  I didn’t get too close.”

“It could have been.” 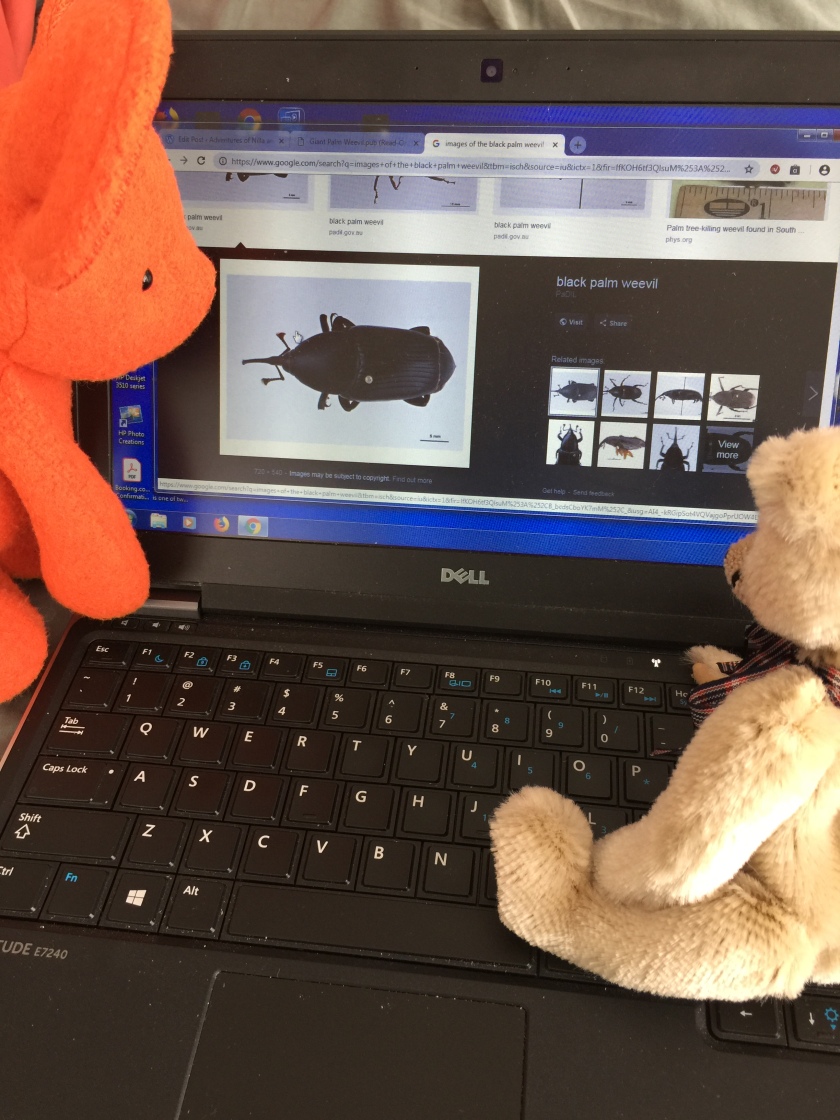 “The adult weevils fly and when not flying about are hiding beneath fronds. The female can produce over six hundred eggs.  These eggs, placed at the base of the palm leaf or frond,  hatch in three to five days and spend the next seven to eight weeks as larvae feeding on the heart (growing stem) of the palm.  Once mature, they construct a cocoon made of palm fibers and pupate into adult beetles.  It’s usually too late to save the palm once symptoms of the infestation occur.”

“Not to everyone Nilla.  The larvae can be as large as two inches and has been eaten as a delicacy in South American for centuries.”

“They are a source of protein and healthy fats!”

“Don’t you want to know how to prepare them?”

“No, but I’m sure you’re going to tell me anyway.”

“Well, season the larvae to taste of course.  They can be fried, boiled, roasted or raw.  Prior to cooking them It is advisable to pierce them, thus avoiding a larvae explosion when heated.  You can also eat the adult weevil, but it’s a little crunchy.”

“And, did you know that they are deliberately cultivated and harvested in several parts of the world?  One blogger said that they can be raised on old logs and fed a combination of sucrose, brewer’s yeast, salt and vitamins.”

“The live variety.  But seriously, they say that if you suspect a palm is infected you can use a stethoscope and actually hear the larvae feeding.  At that point, the best way to manage the infestation is to cut the tree down before the adults emerge.”

“Jackson, I think that is enough, I can’t even stand looking at them, much less the thought of cooking them! We really need to do something about the leaking roof.”

“We can let the owner know and then it’s up to him.  We don’t want to spend our last weeks waiting for people to come and do the work.  By the way, do we need a topic for today?”

“No, I think the black-creature-whatever is enough as a topic for our readers, if they can get past it!”

“Lots of cleaning to do today, no time for a good long walk.”

“We haven’t heard from Aventurero all day and he’s not responding to our messages, wonder where he is?”

“The malecon is crazy again today!  I think it’s crazier than yesterday!  Look, the mural’s finished.”

“Not a Primo Dos, doubt he’s at Ramblas, they have WiFi, he’s probably at Rimini.”

“Sure enough, Diego, Guardagatos is with him too.”

“Diego and Guardagatos had some leaks last night too Jackson.”

“Did you hear what Aventurero did today?  He didn’t wake up feeling ambitious but, he walked way down one end of the beach and then all the way in the opposite direction to the marina!  He must have walked over ten miles today.  He didn’t find any shells either, just like us yesterday.”

“Diego seems to be taking good care of his palm trees Nilla.  He has made sure they’re watered and he’s given them some fertilizer too.”

“Good thing, as his yard is adjacent to Las Dunas, wouldn’t want his trees infested.”

“Time to try some BBQ pinchos.”

The Trio walks up to the street alongside the church, the pincho place is closed, apparently only open for breakfast and lunch.  They’ll try again tomorrow around lunch time, although many restaurants are closed on Mondays.  The alternative, pizza at Genoa.  The tan and white dog is sitting on the stairs standing at attention, muddy and wagging his tail.  He’s majestic in his own way, looks like he could be part Great Dane.  Spaghetti carbonarra for Aventurero and the Ts split the Napoleon with some additional onions and mushrooms.  Bellies are full.  Time to head up the hill for Aventurero and the Ts, back to Las Dunas.

‘Me too.  Good night Jackson.  Don’t let the weevils bite!”