“And you too Jackson. Everyday is Valentines’ Day.  Looks like rain.  I hope that doesn’t spoil our plans.”

“What do we know about Bahia de Caraquez?”

“It’s official name when founded in 1624 was Villa de San Antonio de Caraquez de la Bahia.  Now most people refer to it as ‘Bahia’.  It is located in Canton (county) Sucre in the Manabi province.”

“Well, fitting for Valentines’ Day Nilla, there is a heart-shaped island, in the middle of Rio Chone, Isla Corazon, that is a wildlife sanctuary.”

“I heard there is an archeological museum there too artifacts found throughout Manibi province.  During the pre-Colombian period the Caran indians resided on the peninsula.

“Bahia is located about an hour north of Manta and is a popular tourist destination for people from Quito and Guayaquil, there is also a significant ex-pat presence.  From the time of the Spanish conquest until the mid 17th century Bahia played a significant role connecting the Pacific South American and Central American ports.”

“What about the new bridge?”

“Not exactly new, that was completed in November 2010 and called the Los Caras Bridge, it connects Bahia to San Vincente. You can cross the bay by ferry or over the bridge.”

“‘Los Caras’ probably in recognition of the Carans that lived here in ancient times. I know Bahia became an ‘eco-city’ in February 1999, but why?”

“Prompted by two natural disasters Nilla. The Ecuadorean government provided incentives for deforestation of the surrounding landscape from the 1960’s to 1990’s in order to support the growing cattle industry.  Then in the 1990’s destruction of mangroves in support of the exploding shrimp industry resulted in damage to the delicate ecosystem.”

“And the natural disasters Jackson?”

“In 1997, because of El Nino, it rained everyday in Bahia!  The deforestation resulted in huge mudslides and significant destruction of buildings within the city and surrounding areas.”

“So that’s the first disaster.  The second one?”

“On August 4th, 1998 the city suffered major damage when a magnitude 7.2 earthquake struck, the epicenter just ten miles north of Bahia.  There was a foreshock about an hour and a half before the actual quake alerting city residents.”

“There’s been significant city growth since then but, we should mention a third natural disaster, the earthquake of April 2016.”

“We’ve heard a lot about that quake, the epicenter located along the northern portion of the Pacific coast line.  Here in Bahia it was estimated that seventy five percent of homes sustained extensive damage, some have not been rebuilt while other buildings are crumbling waiting for insurance claims to be settled.”

“It’s pouring Jackson, Diego is coming to pick us up and then head up the hill to Aventurero’s house.  Diego washed the car earlier this morning!”

“Get rid of old mud, get ready for the new!”

“Did you see that Diego had to show is cedula in order to get gasoline?  It’s a government policy I guess.”

“Then it’s your passport.”

“Well we’re on our way Nilla.  Shopping for groceries and footwear.  The Ts are walking so much in the puddles and mud that sandals and tennis shoes are falling apart.  They don’t want to ruin their best ones knowing they will be walking around San Clemente later this week.”

“Diego wants us to call him Norest Grump while he’s acting as our chauffeur and tour guide.”

“Look at those high rise buildings, empty, crumbling, even the museum looks damaged.”

“It must have been awful.  Norest Grump says that many ex-pats left after the earthquake, not to return.”

“Look at the cross up on the hill, wonder why that’s there?”

“We’re going across Los Caras bridge – onto Canoa where Norest Grump says there are great hostels and restaurants.” 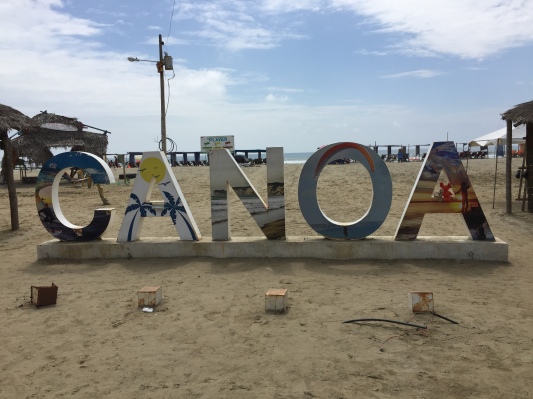 “This is a lovely spot, Hostel Baloo, refreshments for everyone.” 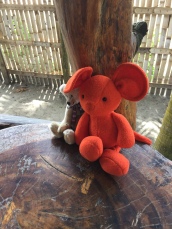 “I hear Canoa has an active night life.  It used to be call Pantaguas or Pintagua.  There are opportunities to learn salsa, as well as the usual beach-related activities.” 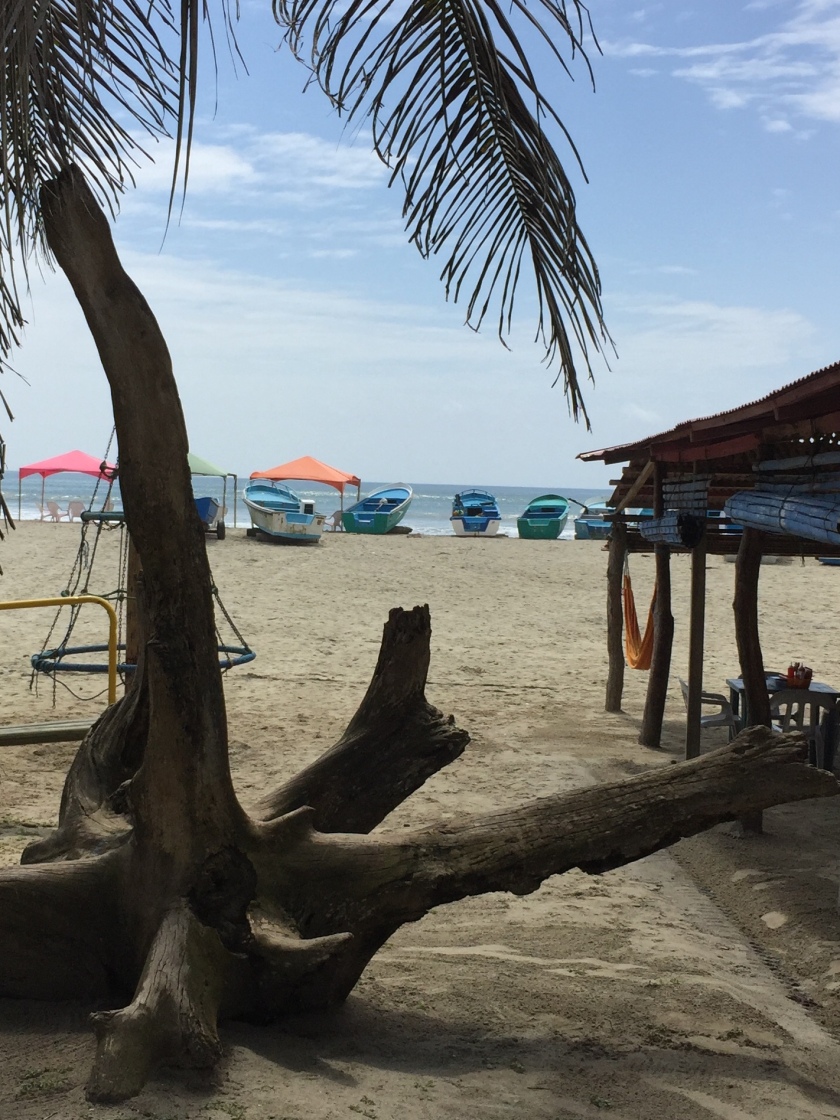 “Lunch at Charlie’s did not disappoint, seafood all around, what a surprise Nilla.”

“It’s off again back to Crucita after a short walk along the beach.”

“Look at the view from here.”

“Gorgeous.  I just hope that they can remove the scars from the earthquake and restore the city to it’s former glory, but many people believe that is not possible.”

“It’s after five o’clock, and we’ve got groceries to put away.  Guardagatos really wants all of us to go to Julio’s place for Valentines’ Day.  No one is hungry after that wonderful lunch, but maybe just a short visit to listen to the music and say ‘hello’ to friends.”

“It’s busy at Mi Tierra Jackson, more new ex-pats.  It’s wonderful to sit and relax and listen to the music.  Guardagotos and his novia are already here and Aventurero and Diego plan to join us, they’re at Ramblas now.”

“It’s been another great day, time to head back to Las Dunas, the Ts are tired.”