“The unusually low tide this morning provides and opportunity for the Ts to take a nice walk on the beach.”

“Let’s see what they bring back Jackson.”

“This beach report is brought to you by Jackson and Nilla.”

“And the weather today Jackson?”

“Hot and humid, partly cloudy with a UV index of fourteen.”

“Moderate beach visitors and moderate fishing boat activity.  Frigate birds are doing their usual flying around looking for a hand out.  Life guard training of some sort – relay races too, Nilla.”

And the creature report…?”

“That’s too bad about the ray.  And the shell report?”

“It was good collecting today Nilla, looks like one fairly large cowry shell and one coffee bean seashell – the others are familiar but I’m not sure of their identity, perhaps a scallop.”

“The noise level on the malecon?”

“Low level ‘bulla’ until the buses go by.”

“And that’s our beach report for today.  Stay tuned for a word from our sponsor…” 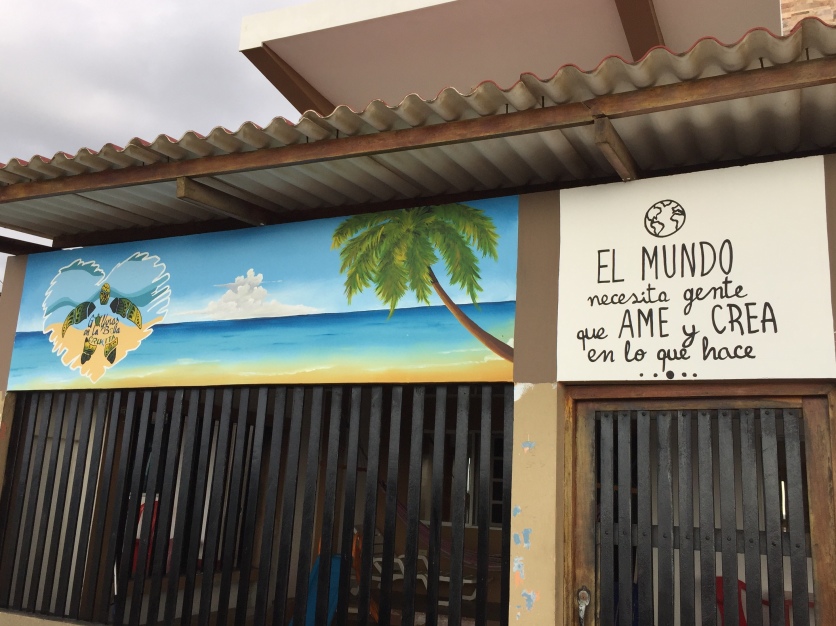 “And that’s a wrap, nice job!  But speaking of the bulla, the loud blaring of music from parked cars, I thought there was a particular type of music for the coastal area Nilla.”

“The traditional music of Ecuador varies by region.  In the Sierra, its a style known as Sanjuanito – the music is recognized worldwide, in part thanks to Simon and Garfunkel.  The rondador, an instrument made from chorded cane (panpipes), played by blowing across the pipes provides the melody based on a five note scale.  There is significant variation from one instrument to another, so, the musician needs to become familiar with his or her rondador.”

“In other words, practice, just like any other instrument.”

“That’s right Jackson, practice.  There are several other traditional Ecuadorean musical instruments, the marimba, the pinkillu flute and the tinya drum to name a few. But you wanted to know about the music from the Manibi province.”

“Along the southern Pacific coast there is a traditional song and a dance called amorfino.  The verses of the song, expressed by one singer to another, can be humorous, satirical, or romantic and usually rhyming – the guitar or viguela keeps the rhythm – the crowd listening to the improvisation of the verse, clapping and cheering the performers on.”

“What about the dance Nilla.”

“Both the song and the dance are very rarely seen except during special occasions.  The tone of the amorfino dance is loose and cheerful – in a two by four step – with specific names for the steps, the tonada, punta and heel and the scuffed scrawl.  It’s origin is an ancient Spanish dance.”

“It would be wonderful to see the dance and listen to the songs, but it doesn’t seem as though it will happen here, Nilla.”

“I don’t even think it happens during carnival, but we’ll have to wait and see, maybe we can talk with some locals to find out.”

“Left overs were tasty Nilla especially with the capers you added.  Want to see if we can find Aventurero?  Maybe he’s with Diego.  At the same time we can check out the malecon and get some more exercise.”

“What a surprise, there they are at Rimini… we’ll be back after walking the malecon.”

“Guardagatos already left – we’ll have a beverage here and then go back to Las Dunas.

“Diego is already planning to head to his place.”

“We’re not far behind.  Just catching up on the day’s events with Aventurero.”

“Yes.  I need to start preparation for shrimps del mar on Thursday, this time lots of garlic.”

“Lots of gringos with Diego at Ramblas as we pass by, we’re not stopping, past our bedtime.”