“Did you feel it, did you, did you Jackson?”

“The earthquake!  It woke up one of the Ts early this morning – up and out of bed!”

“They should have been sleeping in a hammock!!”

“CBS news reports that “a very powerful magnitude 7.5 earthquake struck southern Ecuador in the early hours Friday close to the country’s border with Peru”.  The epicenter about 175 miles from here.”

“There were aftershocks too – also noted by the Ts, magnitude 6.06 and 6.6 within a half an hour of the quake.”

“But we’re fine.  No damage here. And no tsunami risk.  The quake occurred 82 miles from the earth surface – deep, less likely to cause serious damage, shallow, more damage.”

“Perhaps we should explore earthquakes in Ecuador in today’s post.”

“That would be fine, but don’t get too scientific Jackson.”

“While the Ts are off on their usual beach walk this morning, let’s do some research.”

“Jackson, keep in mind that an earthquake is measured on the Richter scale taking into account the origin, depth and seismic waves.” 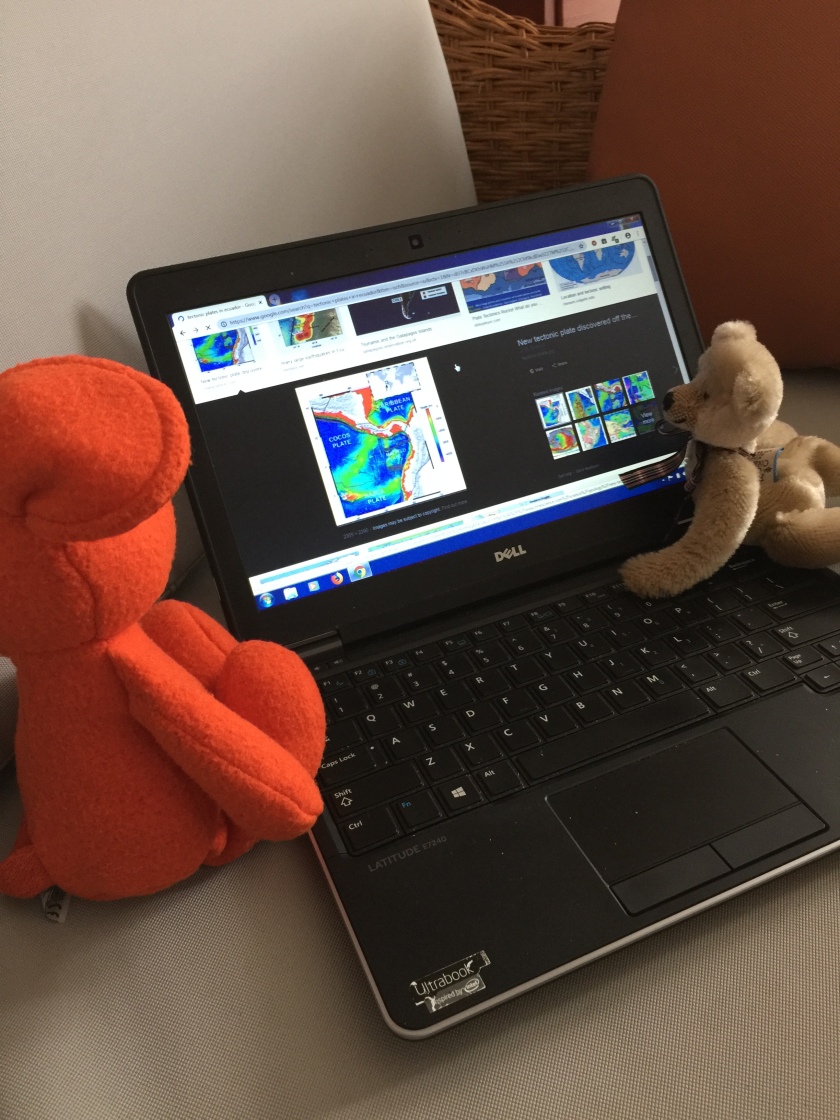 “As you know Jackson, Nazca is an ‘ocean’ plate and is denser forcing it to slide under the South American plate into the earth’s mantle.  On average, fifteen earthquakes on the magnitude between 7.0 and 7.9 occur annually around the world.  The country sits atop the interface between these two plates, specifically, the northern portion of Ecuador overlies a subducted part of the Garnegie Ridge, an area where the Nazca plate strongly interacts with the South American  plate.”

“Tectonic plates move along the mantle, the hot layer just under the crust.  Scientists have been measuring movement and seismic activity for years and try to predict when the next major earthquake will happen. They have also studied the 2016 earthquake and compared it with previous ones in Ecuador.  It was determined that the 2016 earthquake occurred at the same location as the one in 1942 as was the aftershock distribution – both epicenters along the northern coast – could this help in predicting future quakes, who knows.”

“What’s really interesting Jackson is that a geophysicist from Rice University, Dr. Gordon and his colleagues, were doing just that.  They were performing calculations on the movement of major plates, the Pacific, Cocos and Nazca, and as they noted the math ‘didn’t add up.’  That’s how they discovered a new microtectonic plate off the coast of Ecuador, and published their findings in 2017. It’s now one of fifty seven microtectonic plates – they named it Malpelo.”

“From what I understand, the math, as you say, still doesn’t add up and there could be more microtectonic plates just waiting to be discovered.”

“All this said, today’s earthquake was along the southern portion of the country Jackson.”

“We still don’t have all the answers.  You know, some people thought that the deadly earthquakes in Ecuador and Japan occurring just hours apart in April 2016 were related, but scientist claim it was a coincidence.”

“And no tsunami warning.”

“The last serious tsunami to hit Ecuador was in 1979.”

“And they do have an evacuation plan in place and good warning systems here too.”

“Anyway, it’s gringo night a Mi Tierra, see what others have to say about this morning.”

“Ts are going to Rimini for ‘lupper’ about 4:00 PM and then up to the bakery.  Aventurero wants to eat up at Mi Tierra or Crucita Village but he plans to meet up with the Ts to go to the bakery.”

The dorado delicious as always.  No water on the malecon yet this afternoon – too early, high tide not until later.  The bakery has all the Trio’s favorites.  It’s a nice evening for a walk to Mi Tierra.  Lots of talk there about the quake, some felt it and others did not.  No one seems concerned.

“Later reports say there were six people injured near the epicenter, a rural area, no deaths.”

“I looked up Malpelo Nilla.  Did you know ‘mal pelo’ means bad hair, as in bad hair day?”

“Jackson, that’s not funny! You know that has nothing to do with Malpelo.”

“I feel the earth move under my feet I feel the sky tumbling down…humm, humm.”