“No rain yet Jackson.”

“Time to get going – up to the open air market.  The Ts want to see it before they leave back to the U.S.”

“Not up by the market though.  Look at all the produce.” 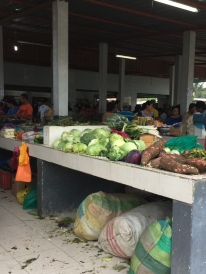 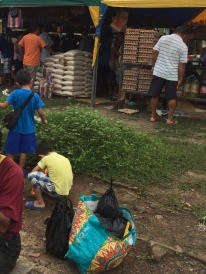 “Mud, people, produce, tricimotos, cars, trucks, this is obviously the place to be on an early Saturday morning!”

“Look at the meat – no special cuts here!”

“Here’s the bakery that others have told us about – it’s not just a panaderia but a pasteleria as well.  Look at those cakes!” 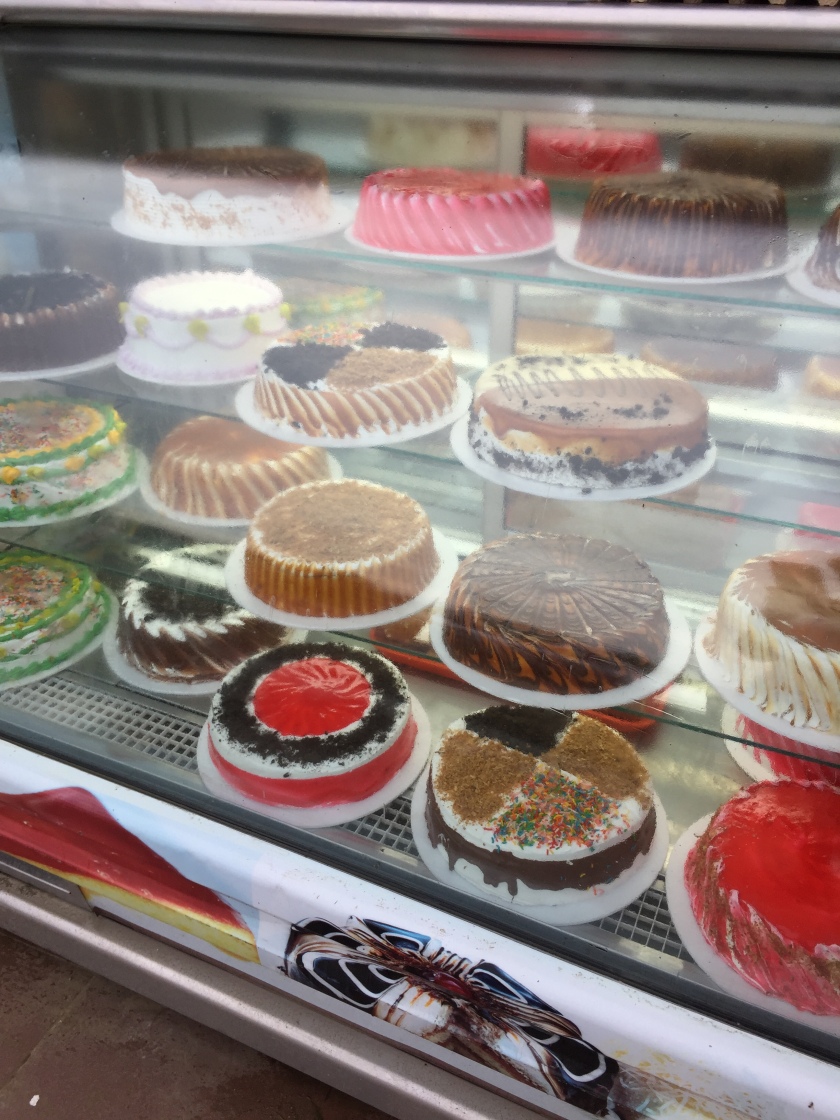 “The corner of malecon is busy too.  Fish, produce, miscellaneous and shrimp!”

“The beach is quiet at this end.  Can hardly wait to see what it’s like at the other.”

“Have you notice all the water tanqueros?  This is not a good sign – they must have not turned on the water.”

Back at Las Dunas concern, no water coming in.  The reserve is down about a tenth.  Enough until next week is its still not turned on.

“Let’s walk up the malecon to see if the ‘letters’ have been installed.”

“Jackson, I thought you said the malecon would be closed to traffic after noon time.”

“That’s what I thought but as they say, “There is an exception to every rule y yo soy la excepcion”.”

“No letters yet.  Looks like the rain they predicted will hold off.”

“There’s Russell, Terri, Roy, Shelly, Gary.  Russell says it wasn’t much of an obstacle race at La Boca today, but they had a good time there after buying lots of strawberries at the open market.”

“There were lots of fruit at the market, just hope he washes them well Jackson.”

“Look at those water guns Nilla.”

“They are directing traffic off of the malecon – at least there are no buses.”

“Haven’t seen Diego or Guardagatos today, wonder where they are.”

“I think we have water coming in at last!”

“Let’s go to Ramblas, it’s getting busy and we want to make sure we get a good viewing seat.”

“Aventurero is here and other gringos too – stocked up with foam for later.”

It’s well past 5:00 before there is any sign of the parade – but the wait is well worth it.  Performers stopping in front of Ramblas. 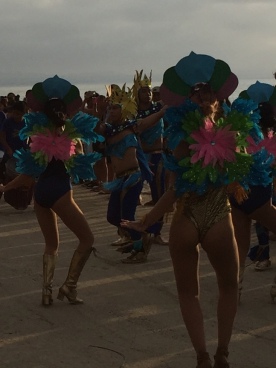 “This is a WONDERFUL parade Nilla!!”

“Pay attention to the golfinas float coming up next Jackson, save the endangered sea turtles!”

“Oh but of course Nilla.” 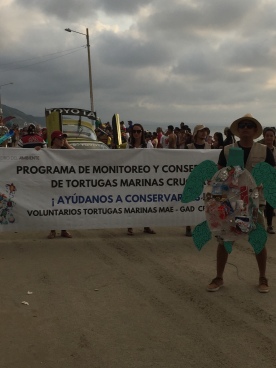 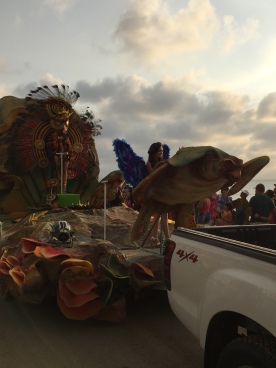 “The Hawaiian dancers are pretty good too, don’t you think?  Their costumes are lovely, modest but one can still appreciate the hip movement Jackson.” 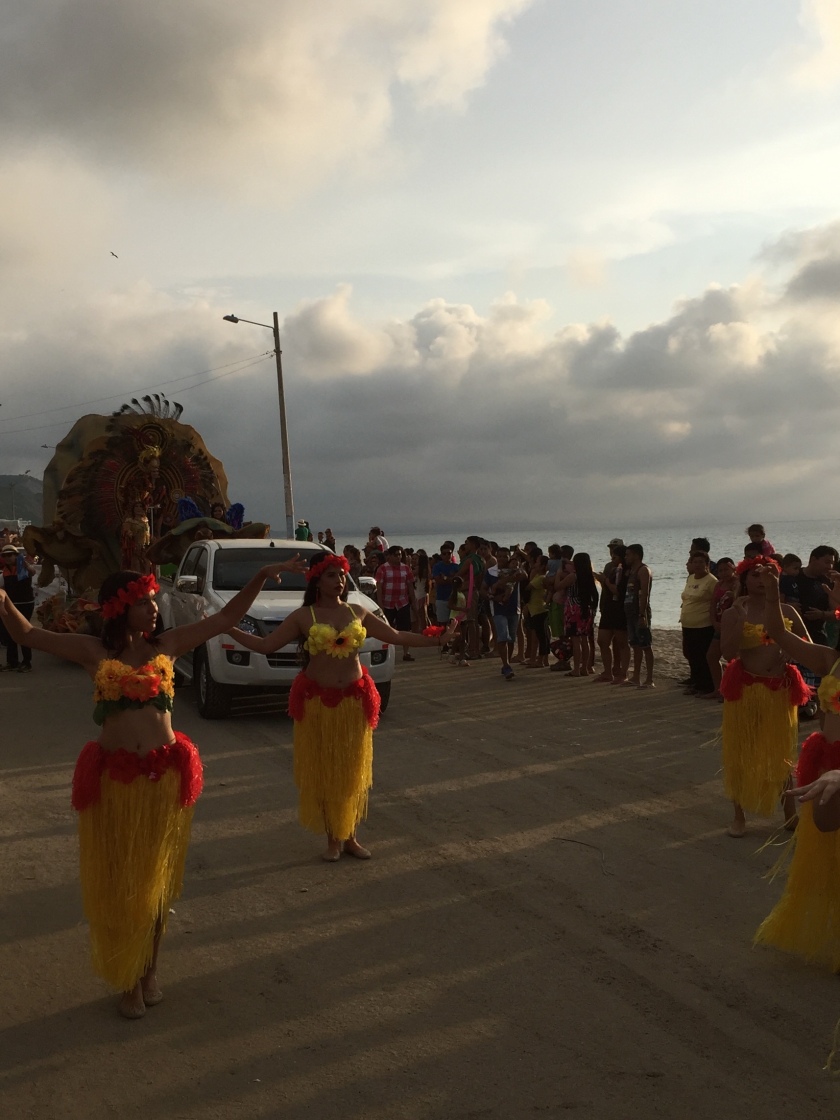 “Look at those sea creatures – and there’s a seahorse too, caballo del mar!” 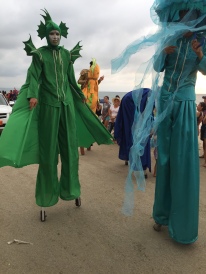 “Those Spanish dancers are fantastic.  The ladies are all wearing heels – impressive.  I wonder if this is a version of the ‘amorfino’?”

“The mexican float is lively too.” 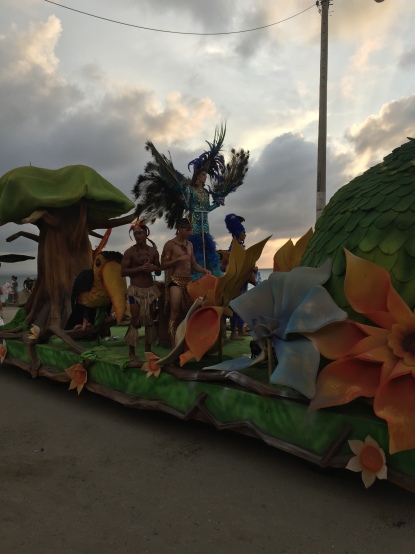 “And bringing up the very end all the motorcycles – a riding group in Ecuador.  Seems I read something about them.”

“Watch out for the foam.”

“Catch that sunset too.  So much for the weather forecast.  Glad it hasn’t rained.”

“Let’s try to sneak back to Las Dunas.”

“Has to be another event scheduled for the same time Nilla.”