“The doves are still incubating those eggs Nilla.”

“Shared responsibility, a partnership, a good thing in a relationship.”

“Blog partners and travel companions with shared responsibilities too Jackson.”

“So speaking of the blog, we need to get going on our beach rocks while the Ts go to breakfast.”

“Let’s take a look some old photographs of them Jackson.”

“Sounds like a good idea.  The ones of interest in this photograph are the round green colored ones and then the one near the edge of the paper towel on the left, not too far from my right foot.  That one has white flecks in it.  Those white flecks are actually crystals.”

“Why is that interesting Jackson?”

“The green ones, while smooth are not very hard and crumble easily.”  But take a look at these in the photograph below.”

“How would you describe them Jackson?” 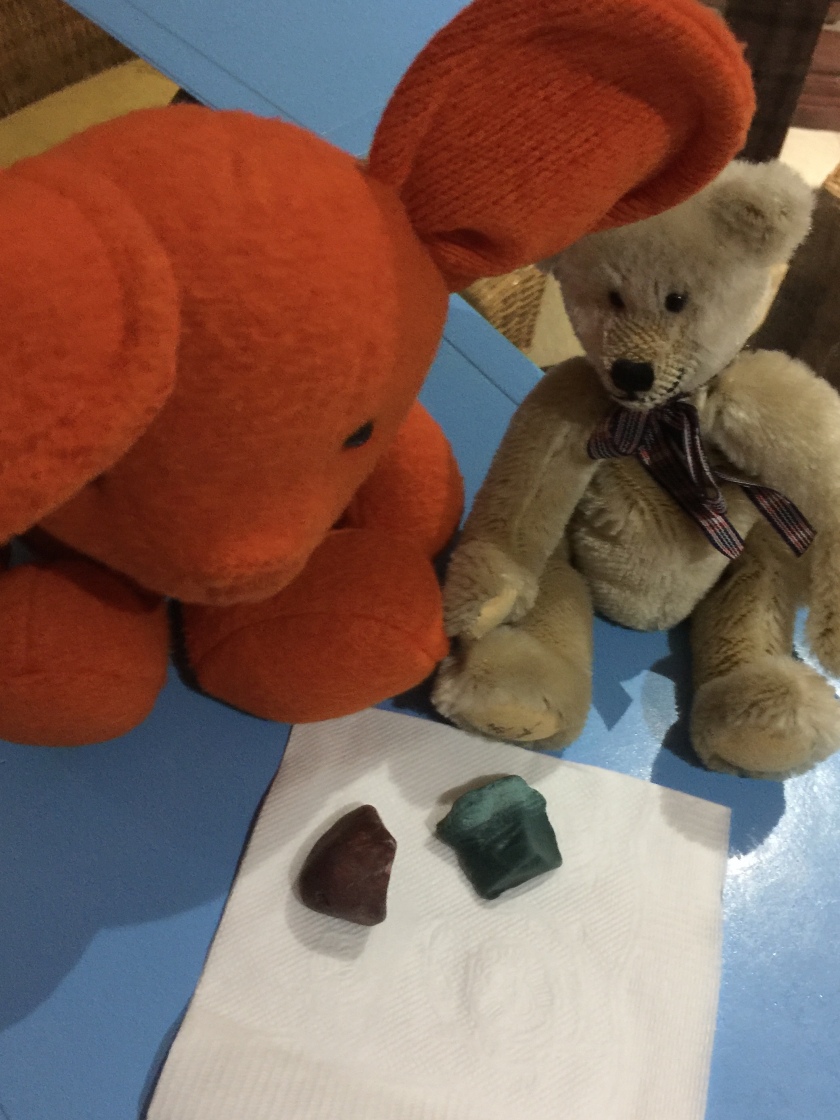 “They are hard, the fracture lines in both are smooth, shiny and concave.”  The red one on the left is distinctive – it’s the only one the Ts found of that color during their beach walks.”

“Okay Jackson, let’s get to the research now.”

“There are four green sandy beaches in the world, one of them in Ecuador, Punta Commorant on Floreana Island in the Galapagos.  The green sand comes from olivine crystals that are carried by the wind from the nearby tuff cones.”

“Nilla, a tuff cone is a type of volcanic rock which is formed when magma interacts with the water, greenish ash deposits, tuffaceous breccia.”

“Do you think that’s what the green stones are?”

What other types of volcanic rock could it be.”

“At first I though the harder rocks could have been unusual samples of obsidian.”

“Yes.  Obsidian is volcanic glass,it is un-crystallized magmatic material with a hardness of 5.5.  This igneous rock is most commonly black but it can also be brown, tan, green (magnesium), and rarely blue red (iron) orange or yellow.  When brown and black are swirled together it’s called mahogany obsidian.  Obsidian’s composition is similar to rhyolite and granite and these can come from the same magma.  it’s not considered a mineral because of it varied components.  And Nilla, not all volcanic glass is obsidian.”

“How does obsidian form?”

“For obsidian to form, lava is trapped below the point of crystallization. Magma that doesn’t crystallize will form obsidian.”

“So why did you think it was obsidian?”

“Because of the curvature and smoothness of the fracture.  It’s important to realize that obsidian is extrusive, that is it is ejected from volcanoes and cooled rapidly and therefore has very little time to form crystals.”

“So the rock with the crystals in it, what is that?”

“It’s intrusive rock, that is to say, that the magma is forced into older rock at depths within the earth’s crust.”

“So is that what happened with the rock with the crystals in it?”

“Maybe Nilla, to be technical, it could be intrusive igneous rock hypabyssal, subvolcanic  porphyritic, which means in non-technical words rock containing crystals or crystalline particles formed under the earth’s crust, but I’m not a geologist you know.”

“So if not obsidian, what do you think the harder rocks are?”

“Feldspar, as magma cools, crystals are formed and feldspar is a crystal which can present in a variety of colors. ”

“But then again it could be chert.”

“Sounds to me that when the geologist aren’t sure and they know the rock is crystal in nature it’s ‘chert’.”

“All this from some stones the Ts picked up on the beach.”

“Oh, the Ts are back from breakfast, time to head to the pool.”

The pool is not crowded and is relaxing – a little sun, a little reading, a little splashing.

“What are the Ts going to do for dinner?”

“They’re not taking us Nilla.”

“No, something about BIG dogs.  Three of them!”

“They took pictures for us.”

“No WiFi there -‘talk with one another, I like that!”

“Jackson, look at those eyes!”

“Nilla look at that mouth!”

“We’d be play toys for them.  Thank goodness we didn’t go.”

“Wonder if they eat pizza.”

“Nilla, that’s not funny!”  Let’s get some rest – remember we’re going back to Crucita tomorrow.  The Ts have already called Carlos to bring us back to Manta in the evening.”