“Well, Jackson, what do you think about our second week?”

“It was fun meeting Glenda at SuperFoods.  She was born in Aruba and is multilingual but her native language is Papiamento – a combination of Dutch, English, Spanish, French, Portuguese and African languages.”

“Papiamento was officially added to the school curriculum in 1998.”

“SuperFoods is always fun to visit, it’s so big – and the Ts got to use the tourist savings card for the first time – they should mention that at La Cabana when you check in, otherwise people won’t know about it!”

“There’s lots of interesting topics to discuss in this week’s blog – we learned a lot – managing trash on the island, regulations for cell phone use while driving and a little about ATMs here.”

“So where do we start, Nilla?”

“So, there is absolutely no cell phone use while driving, a fine of $290 if you get caught, and if you are using a cell phone and cause an accident, you are fined thousands of dollars and may be incarcerated as well.”

“What about hands-free devices Jackson?”

“Pretty strict.  Have you noticed they seem to be doing away with traffic lights?”

“That seems to be the plan Nilla.  They are re-configuring the intersections with roundabouts.”

“And are the rules entering a roundabout the same as back in the US?”

“That’s right Nilla.  Pretty standard, keep in mind that you drive on the right hand side of the road too.”

“Now what about parking and are you licensed to drive with your stateside driver’s license?”

“Well, first of all, yes you can drive on a state issued driver’s license or if you prefer obtain an international driver’s license such as one you can pick up at AAA before leaving home.  Remember too, drivers must wear seat belts as well as any passenger in the front seat.  In Oranjestad there are parking meters, parking spaces are at a premium there.  If you overstay your time there is a fifteen minute grace period, after which you are ticketed.”

“That seems pretty fair.  You know that gasoline prices are regulated by the government – no need to shop around, and another tip, if your out in more rural parts of the island and get lost, look at the fofoti or divi trees, they point southwest.”

“Why is that Nilla?”

“Because of the prevailing winds. The fofoti tree and the divi tree are often confused – just remember the fofoti tree grows on the beach, like the ones on Eagle Beach and the divi are found throughout the island.  Now let’s talk ATMs.”

“ATMs in Aruba, for the most part, will dispense US dollars or florins, but keep in mind the transaction can be costly and therefore recommended that if one absolutely needs dollars, withdraw a sum that should be sufficient for the entire stay on the island.  Most major credit cards are honored at shops and restaurants.  One should ask for change in US currency  – but change is usually in florins – the half florin, a square coin, is called the yotin.”

“Enough of the informative, let’s talk about some of the highlights of the week Jackson.”

“Well Nilla, you know how much I enjoy watching the sugar birds, they are so cute, but I don’t understand how that avoid getting drunk tasting the liquor on the tops of the bottles at the bar!” 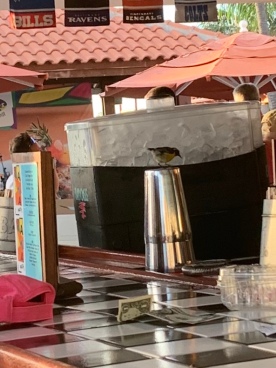 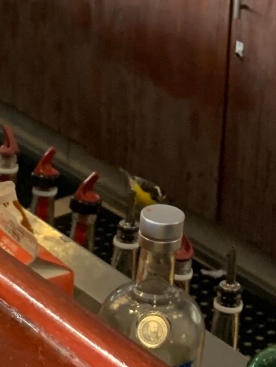 “I have no idea Jackson.  I like the music poolside, it was so nice to see one of the bands we enjoyed last year, back again.”

“And don’t forget the walk to Oranjestad at the beginning of the week – a little over four miles.  And we saw a monarch caterpillar munching on a large milkweed bush along the way, just in front of the Port Authority offices.  There were several empty chrysalis too clinging on the chain link fence.”

“Although we didn’t stop in, the Aruba Beach Tennis Tournament was underway – lots of cars and people, I think it ended yesterday.”

“I also liked the visit to the local Harley Davidson shop, the girls were so friendly there.  The island is perfect for riding, don’t you think so?”

“Probably not so much during the rainy season Jackson.  You know you had been worried about the iguana eyeing you for a snack? Well, I found out that iguana once upon a time were considered more tasty than chicken, iguana soup, iguana stew – but now it’s illegal.”

“Do you think some people still do?”

“We still enjoy the blue horses around Oranjestad, and of course you had to stop in to say ‘hello’ to the clerks at the downtown Pandora store, didn’t you.”

“I didn’t buy anything Jackson!”

“At least we were able to make the necessary purchases at Coconuts.  The service a Lucy’s marina cafe hasn’t changed much – not any better than last year.”

“Taking the bus back to Eagle Beach is so easy from the downtown terminal, the buses are pretty much on schedule too.”

“So, let’s leave the remaining topics for next week’s blog.”

“It’ll be a short one Jackson, we leave Thursday afternoon – I just hope it warms up a bit back home, otherwise we’ll be freezing, literally!”