“Nilla, we’re way behind in blogging – I thought the commitment was twice a week.”

“Can’t help it Jackson, we were going to blog yesterday, remember?  Instead a transformer malfunction in Charapoto and then another blew up in San Clemente.  Can’t do anything about that!  At least it was repaired relatively quickly!”

“Okay, so let’s get on with the update.  The Christmas bush was painted, placed in the pail and out on the deck by the twenty first.” 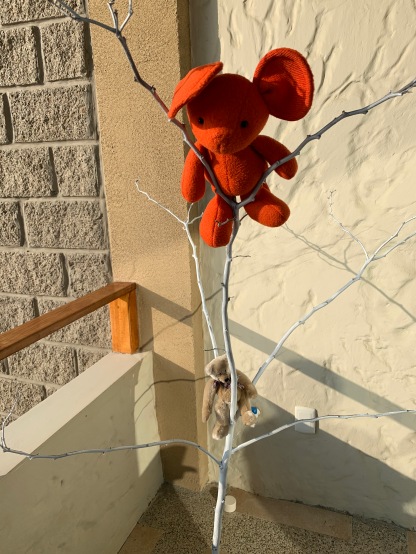 “The shells, collected from Crucita last year tied on green and red ribbon are lovely.  The bush stays on display until January 7th, the day after Epiphany.  Don’t forget the sand dollar test – that’s from the beach here.  While there aren’t many shells, there are a fair amount of sand dollars, you can tell from the butterfly-like impression on the sand surface.” 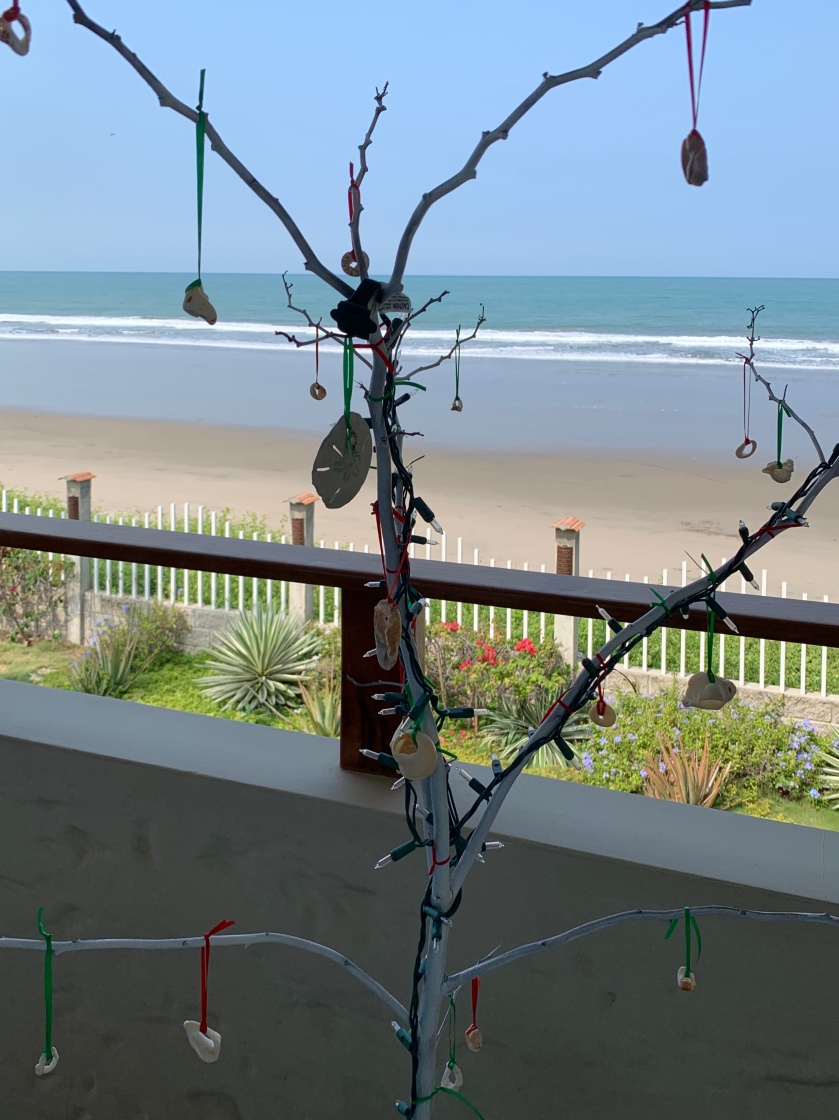 “Of course I do.  It was nice to be able to breeze dry the clothes – better than using the dryer.”

“And when we thought there weren’t enough ‘ornaments’ Aventurero picked some up on his walk on the beach.”

“There are a number of nice small restaurants in town.  The BBQ book place, Zona Cero for one and the new cafe, Cafe Mussol is very trendy I’d say.  Fernando and his father Patricio built it – sandwiches, beer, wine, soda and from what we’ve heard, fabulous burgers.”

“Mussol is owl in Castellano, and Fernando loves owls.”

“But you know Jackson, owl in Spanish is really buho.”

Zona Cero is interesting as it serves as a book exchange – take a book, bring it back or exchange it for another.  Most of the wait staff speak some English.”

“Last Monday, the twenty third was a busy day.”

“The proprietors all seem so very nice.”

“The nativity scene and other decorations around San Clemente are lovely.”

“They have murals here too, similar to the ones in Crucita, but not quite as elaborate.” 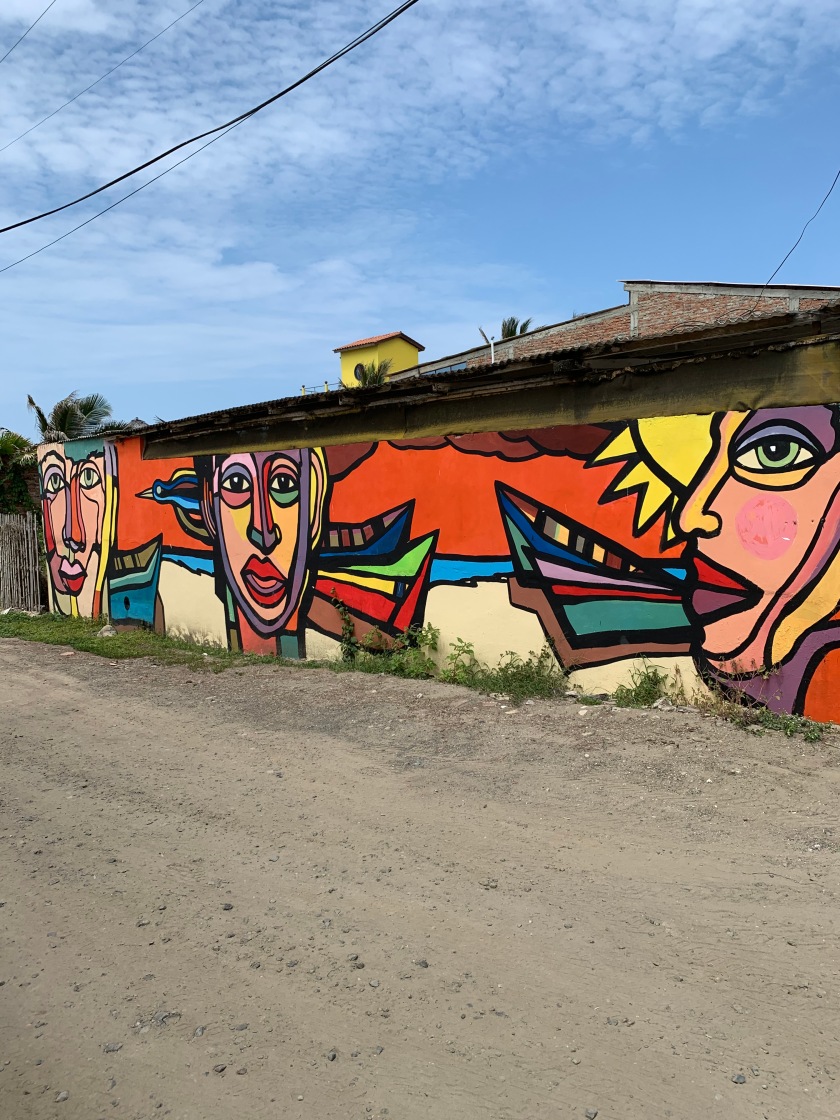 “But Nilla, the really  busy day was Tuesday, the twenty fourth, when we went back to Crucita!”

“The ATM worked just fine, Genoa Pizza is still there, just not open, and the malecon, it is soooo clean now!”

“And Jackson, quiet too!  Apparently the new sheriff is enforcing the laws – no loud boom boxes, no drinking on the beach, no walking around with an open container, and so on.”

“Fewer fishing boats along the side of the road too, must be that the marina is completed, but that’s for another trip to explore.”

“Stopping by the souvenir shop to pick up some tagua rings – and just happening to find an owl key chain – to add to Fernando’s collection.  That was fun too!”

“Rimini’s is just as it was when we left – it was great seeing Kevin.”

“He said business is still not as great as it was – perhaps a combination of enforcing the laws as well as some tax he talked about, not sure what that’s all about.”

“AND, we met up with Aventurero.  That’s when we got the additional shells for our bush!”

“As we walked down the malecon, it was exciting to have numero seis beep, he remembers us from last year – taking us to La Boca.”

Up off the ground so it doesn’t get wet

“The nativity scene is up off the ground this year.  I remember how is was in danger of getting washed away by sea water last year.”

“Look, Las Dunas’ entrance has a fresh coat of orange paint, and the house where we stayed last year has been painted white.”

“Manny the security guard also remembers us – he said that there hasn’t been significant work on the house and it hasn’t been rented.”

“Rather sad, don’t you think Nilla?”

“It’s not our problem now.”

“True.  As planned our friends gathered at Primito, Neiser’s new restaurant out front from Diego’s house.  Cute and clean, he’ll do well here.”

“Did you hear Jackson how many cats Guardagatos has at his place? Over twenty!”

“Aventurero seems happy.  He’s all set for his adventure to Peru on the twenty ninth.  Has to leave the country before the thirty first then re-enter to renew his tourist visa.”

“We won’t see him again until he has returned, and I can hardly wait to hear his stories!”

“Nilla, didn’t you think we had just gotten back to Crucita when Marcelo came to pick us up.”

“We’ll be back Jackson, we promised the copper coated pan that we brought from the U.S., that doesn’t work on our induction stove top, to Neiser and we told Kevin we’d be back next week.”

“Had to learn a bit about cooking with induction – heats up fast and cools down just as fast – challenging.”

“Christmas was quiet – chicken pasta alfredo and fresh salad, with milk and cookies for desert, yumm.” 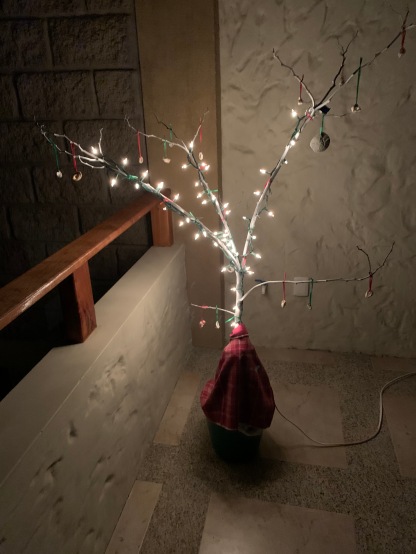 “The sunsets here are spectacular!” 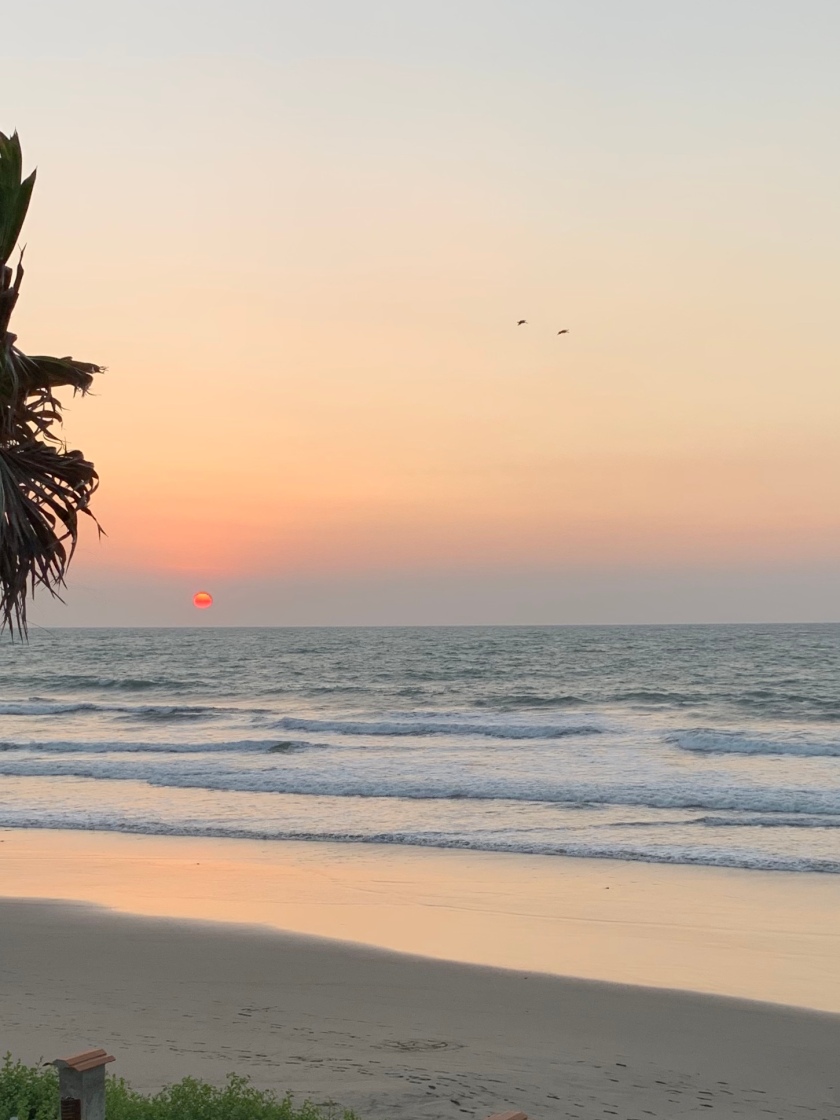 “The beach walks are great exercise.” 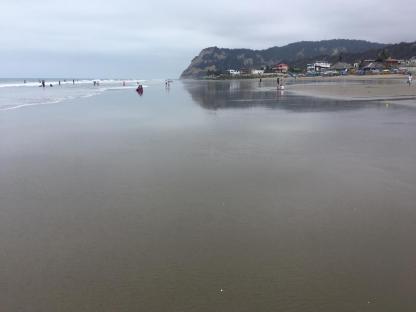 “Walking down to San Jacinto and back is about a four mile walk.  The nice thing is that there are more tricimotos in San Clemete – now about six compared to last year’s two.”

“So if we get tired, we can get a lift.  Some even have business cards and you can call for a pick up!”

“Fifty cents for an in-town ride and one dollar from San Jacinto to San Clemete or vice versa.”

“And, Hotel San Jacinto serves, breakfast, lunch and dinner – food is a little pricey but the beverage prices are reasonable.”

“Most likely, now onto the next holiday –  the paper mache figures are appearing outside the little shops, hot items for the new year’s celebration.

“I wonder if it will be as exciting here as it was in Crucita?”

“Depends if it is high tide – then there is no beach to have the midnight fires.”

“Guess we’ll have to wait and see.”

“Do you have a preference for shopping in Puertoviejo or Bahia?”

“The Ts don’t have a preference.  They took a second bus ride, this time to shopping in Bahia.  the bus ride was shorter – less frequent stops but they had to grab a cab from the terminal to the shopping mall, an extra $2.00, which really isn’t bad (added to the $0.75 per senior bus ride).  The cab ride back costs the same as from Puertoviejo, $15.00.”

“We don’t have a routine yet, but who cares.  We’re meeting lots of new friends, and dogs, keeping everyone’s name will be a challenge.”